Ukraine and pro-Russian rebels have completed a swap of hundreds of prisoners that was agreed in Belarusian capital of Minsk days earlier at peace talks that eventually broke down.

Four Ukrainian soldiers were handed over on Saturday by separatists fighting in Luhansk, following up on a mass prisoner exchange that involved 222 pro-Russian fighters and 145 Ukrainian troops a day earlier.

“My heart as that of a president and citizen is brimming with joy that you – as I had promised – will be able to meet the New Year with your families and comrades in arms,” Poroshenko said as the released men huddled around him on the tarmac.

He promised to search for and find all of the missing soldiers and “not leave anyone behind”.

However, one of the 146 Ukrainian prisoners originally brought by the rebels refused to rejoin his old military unit, and was eventually taken back to Donetsk.

“All of my relatives are in Russia,” the ethnically-Russian Alexei Samsonov told the AFP news agency. “I consider what the Ukrainian army is doing not to be right.”

The deal, announced on Friday, was sealed despite Ukraine’s decision to cut off key transport links to Crimea, a Black Sea peninsula that was annexed by Russia in March.

The exchange began on Friday on a dark and isolated stretch of a road north of the devastated eastern rebel stronghold of Donetsk, and unfolded as negotiators from both sides held video talks on Skype at reviving stalled negotiations.

The two warring sides lined up the prisoners some 100 metres apart in the no-man’s land between their frontlines, with heavily-armed soldiers and rebels fidgeting nervously in the dark with their automatic rifles.

Some of the captives expressed surprise and joy at having the chance to go home in time for New Year’s Eve – the most cherished of all the holidays celebrated in once-communist eastern Europe.

“They only just told us that this would happen,” said a slightly older Ukrainian soldier named Artyom Syurik.

“I am looking forward to seeing my parents and wife. They do not know I am coming.”

Yet a rebel named Denis Balbukov sounded defiant as he sat in a Kamaz truck waiting to go home to Donetsk.

“I will go back to fighting,” the 21-year-old said. “It was alright once we were moved to the detention centre, but to begin with, they really tormented and roughed us up.”

But he too was looking forward to going home, adding: “I want to eat fried potatoes and talk to my relatives.”

Smaller such exchanges have been frequent and often involved dozens of men. 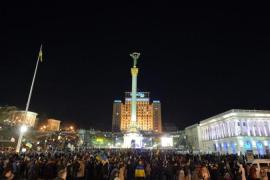 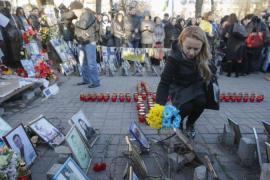 Ukraine crisis: Are there any winners?

Thousands mark the one year anniversary of protests that toppled Ukraine’s pro-Russian president. 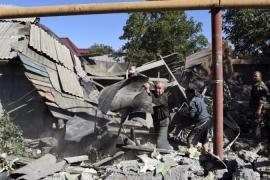 Risk group accuses rebels of torture and says displaced people are at risk of labour abuse and human trafficking.