Hong Kong police have arrested 12 protesters blocking several roads in the Mong Kok neighbourhood after a night of clashes, according to a police statement.

Thursday’s gathering was the first sizeable rally since the last protest camp was cleared last week.

Police used pepper spray and batons to break up the protest and arrested demonstrators overnight.

They were charged with various offences ranging from assaulting a police officer to failing to produce proof of identity, the police statement said, adding that two police officers were injured in the operation.

“Police had made repeated public announcements and displayed warning banners at the scene to urge them to leave the scene but they refused to comply,” the statement said.

Over the last several months, thousands of protesters occupied three busy neighbourhoods, including Mong Kok, to demand that residents of the semi-autonomous city be allowed to elect their top executive in 2017 from an open list of candidates.

Chinese officials want a committee believed friendly to their government to select the candidates.

Police cleared out the last the of the protest sites on December 15.

Leung Chun-ying, Hong Kong’s chief executive, made on Thurday first visit to the Chinese capital Beijing since the sit-ins ended to deliver an annual report.

“One of the main points would be related to me and the government’s determination to achieve elections for the chief executive in 2017 … I believe that the determination of the central authorities has not changed,” Leung said before his trip. 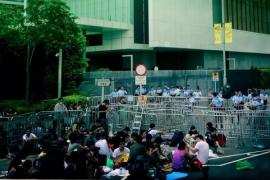 Hong Kong protesters sure of goal, not method

The resignation of chief executive Leung has emerged as the main demand but opinion is split on how to achieve the goal. 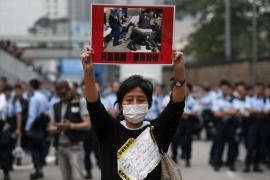 Police in Hong Kong attempt to retake streets after 2.5 months of protests.