India’s governing Bharatiya Janata Party (BJP) has made significant election gains in the state of Jammu and Kashmir but is going to fall well short of a majority, according to partial results.

BJP had tried to wrest power for the first time ever in the divided Himalayan region, where armed separatist groups have been fighting Indian rule since 1989.

Early results, released on Tuesday, indicated no single party would win a majority in the 87-member state assembly, with the Peoples Democratic Party (PDP) likely to take the highest number of seats.

The PDP, a regional party, was part of a coalition that ruled the state during one of its most peaceful periods between 2002 and 2008 and is likely to form the next government in coalition with other groups.

Both the BJP and the PDP benefited from widespread public discontent over the ruling National Conference party’s handling of devastating September floods that killed more than 200 people in Kashmir.

Analysts said the BJP’s history, however, meant it was unlikely to be part of a ruling coalition with the PDP.

Narendra Modi, India’s prime minister, was accused of failing to curb 2002 anti-Muslim riots that claimed at least 1,000 lives when he was chief minister of Gujarat state, a charge he has always rejected.

The PDP will find it easier to form a coalition government with the Congress for the reason that allying with BJP will anger its constituency in the Muslim-majority Kashmir Valley, analysts say.

The BJP had campaigned aggressively in the region, which has been the scene of two wars between the neighbours.

Modi held a series of rallies promising to bring much-needed economic development after decades of unrest, while the party ran a high-powered media campaign and fielded 32 Muslim candidates.

It also sidelined a long-standing pledge to scrap Article 370, a constitutional provision that grants Kashmir special status in India and allows it to make its own laws.

All of the BJP’s gains in elections, however, came in the mainly Hindu Jammu area, while the PDP dominated in the Kashmir Valley.

Hina Bhat, a Muslim woman who became the face of the BJP during the elections, failed to win her seat in the Kashmir Valley.

Nonetheless the BJP, which is enjoying a honeymoon period after Modi’s national election victory this year over the previously ruling Congress party, has more than doubled its seats in the state parliament.

The final results of the election are expected to be announced later on Tuesday.

Votes are also being counted in the insurgency-racked and impoverished central Indian state of Jharkhand, where the BJP is expected to win a majority. 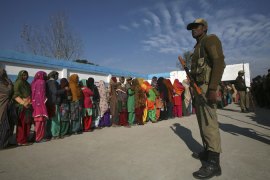 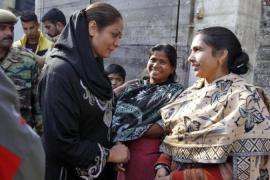 Hina Bhat is running for elections in Indian-administered region with party linked to Hindu nationalist ideology. 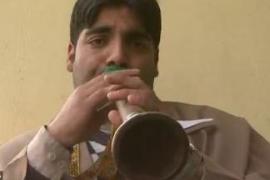