Rafael Hui, Hong Kong’s former deputy leader, and Thomas Kwok, a property tycoon, have been jailed for corruption in a prominent trial that angered the city’s public.

Hui, 66, was given seven and half years in prison on Tuesday for five fraud charges, including misconduct in a public office.

It makes him the highest-ranking official in Hong Kong’s history to be convicted of taking bribes.

Kwok, 63, who was a joint chairman of the biggest property company in Hong Kong, Sun Hung Kai, was sentenced to five years in jail after he was found guilty of conspiracy to commit misconduct and making a series of payments totalling $1.1m to former Hui.

Andrew Leung, an independent analyst on China, told Al Jazeera that there was a lot of shock surrounding Kwok’s sentencing, as he had been a respected civil servant.

“On the other hand, his conviction really reaffirms that Hong Kong is a place where the rule of law still reigns.

“The whole country, and now Hong Kong, is trying to rid itself of this cancerous cell [corruption] that undermines the legitimacy of the whole government.”

The seven-month trial centred around a total of $4.38m in handouts, which the prosecution said were made to Hui by Kwok and his brother Raymond to be their “eyes and ears” in government.

Charges were dropped against Raymond, while Kwok was cleared of two out of the three against him.

“To know that the former number two in government had received bribes must be a deep disappointment to many people in Hong Kong,” he said.

“It is vitally important in these times the Hong Kong government and business community remain and are seen to remain corruption free, particularly when the mainland is taking obvious and positive steps to eradicate the cancer of corruption in their own jurisdiction.”

Kwok, however, was given a lesser sentence than the maximum of six years because of his “good character”, Macrae said.

In advance of the sentencing hearing, Macrae described the case as “difficult”.

“One is dealing with otherwise decent men who are not young, but who have committed serious offences,” he said, adding that going to prison would be a “particular hardship” for the defendants.

The payments to Hui were said to have been made by a series of complicated transactions involving middlemen.

Chan was sentenced to six years while Francis Kwan was given five years. 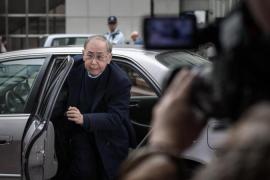 Accused of bribing a senior government official, the billionaire Kwok brothers could face up to seven years in prison.