Tunisians are going to the polls to freely elect their president for the first time in the country’s history, rounding off an at times bumpy four-year transition from dictatorship.

The runoff on Sunday pits 88-year-old Beji Caid Essebsi, leader of the Nidaa Tounes party, against incumbent Moncef Marzouki, who held the post through an alliance with the moderate Islamist movement Ennahda.

The landmark second-round vote sets Tunisia apart from the turmoil of other Arab countries that went through the uprisings that started in 2011.

The vote, which is taking place amid tight security and the closure of main border posts with strife-torn neighbour Libya is the first free presidential election since independence from France in 1956.

Concerns about low voter turnout persisted, however, after the first round which had a low number of young voters.

This was widely blamed on the political parties, which remain unable to engage the youth and address their issues.

A first round, held on November 23, saw Essebsi win 39 percent of the vote, six percent points ahead of Marzouki, a 69-year-old former rights activist installed by parliament two months after December 2011 polls.

Election day was marred by violence as Tunisian troops killed a gunman and captured three others after they attacked soldiers guarding ballot papers, the defence ministry said.

The pre-dawn attack targeted a school in the central region of Kairouan where the ballot papers had been stored under army guard.

“The vigilance of the soldiers and the swiftness of their response thwarted this operation and led to the death of a man armed with a hunting rifle and the arrest of three suspects,” ministry spokesman Belhassan Oueslati told AFP news agency.

The vote is the country’s third in as many months, after Nidaa Tounes won an October parliamentary election, making Essebsi favourite to be the next president, but with powers curbed under constitutional amendments to guard against a return to dictatorship.

The campaign has been marked by mudslinging, with Essebsi refusing to take part in a debate with Marzouki, claiming his opponent is an “extremist”.

Essebsi insists that Marzouki represents the Islamists, charging that they had “ruined” the country since the 2011 revolution which toppled veteran ruler Zine El Abidine Ben Ali and gave birth to the Arab uprisings.

Throughout the campaign, Marzouki has accused Essebsi, who served as a senior official in previous Tunisian governments, of wanting to restore the old guard deposed in the revolution.

He has even suggested that Essebsi’s camp was preparing to “win through fraud”, drawing a sharp rebuke from the electoral commission.

The final result is expected to be announced between December 22 and 24.

In an internet video posted on Wednesday night, armed men claimed the 2013 murder of two secular politicians that plunged Tunisia into crisis, warning of more killings of politicians and security forces.

Last year’s murders had threatened to derail Tunisia’s post-Arab uprisings transition until a compromise government was formed in January this year.

The authorities have deployed tens of thousands of troops and police to guarantee security on Sunday.

In addition to the threat, Tunisia faces other major challenges.

Its economy is struggling to recover from the upheaval of the revolution, and there are also fears of widespread joblessness causing social unrest.

The International Crisis Group think-tank has said Tunisia was the “last hope” for a peaceful transition to democracy, setting it apart from other Arab countries that went through uprisings, such as Libya and Egypt.

“In the context of the meagre harvest of the Arab Spring, Tunisia remains the last hope for a successful democratic transition,” it said.

“The country and its allies have every reason to ensure that Tunisia continues on its exceptional course.” 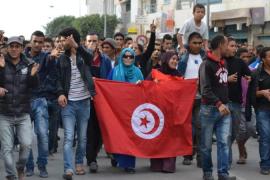 Why Tunisia succeeded where Egypt failed

The situation in Tunisia remains perilous despite the smooth parliamentary and presidential elections. 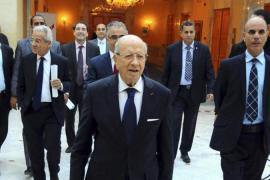 Tunisia caught between fear and stability

Tunisia might be making progress with elections, but internal political polarisation is reaching dangerous heights. 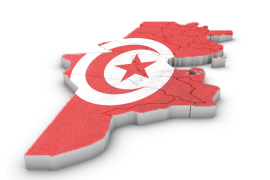