Amman – Khaled al-Maani sat neatly on one of the brown velvet mattresses lining his parents’ living room in southern Marka, Jordan, flipping through his schoolbooks.

The 13-year-old told Al Jazeera he “hated” school five years ago, when his teacher asked him to return textbooks she gave to him by “mistake”. He was not entitled to them, she said, because he was Egyptian.

“But my mother is Jordanian,” Khaled explained.

It was the first time he had encountered the reality that in his family of eight, only his mother was a Jordanian citizen, while he and his six siblings – despite being born and raised in Jordan – remained “second-class citizens”. While Jordan’s citizenship law states that “children of a Jordanian [man] are Jordanian regardless of where they were born”, Jordanian women cannot pass on their citizenship if married to non-Jordanian men.

Khaled’s mother, Laila al-Maani, and thousands of Jordanian women have staged more than 50 protests over the past decade at sites ranging from government offices to the Royal Court, demanding full rights for their children. Last month, the government finally responded to their campaign, rejecting their demands of full citizenship for their children and instead implementing a scheme of “benefits” to “ease” the children’s access to some services.

The benefits, which apply to children but not husbands, would provide improved access to primary education in public schools, health insurance and driver’s licenses, and an exemption from fees associated with residence permits and work permits.

The decision has sparked mixed reactions, with some touting it as a “step forward” and others maintaining that it has only reinforced gender discrimination in the country.

“We are not half citizens or refugees in our country to be granted benefits instead of full rights,” said activist and TV journalist Aroub Soubh, leader of the My Citizenship is a Right to My Family coalition.

Although activists described the outlined benefits as “insufficient” and “disappointing”, some said it was at least progress towards ending the plight of thousands of Jordanian women.

“It is a very small step towards achieving [for] women more than just basic human rights … in the future,” Nima Habashna, who established a grassroots campaign demanding full citizenship rights for the children of Jordanian women, told Al Jazeera.

The new government benefits aim to help 365,000 people living in Jordan, born to 82,000 Jordanian mothers married to foreigners, according to government figures. Prime Minister Abdullah Ensour has confirmed that the decision “is not a step towards granting full citizenship or conscription into the army” for these individuals.

Shouting 'my mother is Jordanian' saved him from death or prison.

- Mother of son beaten by the police


“This is a humanitarian issue that impacts the children of Jordanian women living among us,” Mohammad Momani, Jordan’s media minister and government spokesperson, told Al Jazeera.

One woman, who spoke to Al Jazeera on condition of anonymity, said her 20-year-old son was beaten by police for failing to present an ID at an Amman shopping centre. “Shouting ‘my mother is Jordanian’ saved him from death or prison,” she said. A few weeks later, she said, her son attempted suicide after being denied a driver’s licence.

In another case, to send her eldest son to university, Mashal al-Zoubi spent 10,000 dinars ($14,000) – three times the tuition for a Jordanian citizen. His annual work permit costs the family 400 dinars ($565), but he is still unable to work, as priority is given to Jordanians. Another of Zoubi’s sons works for a cleaning company that confiscated his passport, as they do with all “migrant workers”.

“We feel that our children are punished for us marrying non-Jordanians,” Zoubi, a mother of four who is married to an Egyptian, told Al Jazeera.

Women must have lived in Jordan for five consecutive years with their children to be entitled to the government benefits, a violation of “people’s right to move freely and pursue job offers and education opportunities abroad”, Soubh said.

Jordanian officials, meanwhile, cite their fear of having Jordan become an “alternative homeland” to Palestinians as the reason for not granting full citizenship rights to the children of Jordanian women. “We do not want to empty Palestine and achieve the goals of the occupiers,” Ensour told journalists at a recent news conference.

According to official figures, 52,650 Jordanian women are married to Palestinians – the bulk of the 82,000 Jordanian women married to foreigners. Although King Abdullah II has publicly rejected the notion that Jordan could become an “alternative homeland” to the Palestinians, fears persist among East Bank Jordanians that the government’s new measures could lead to a demographic change.

“Absolutely, a fear of a demographic change in Jordan is there, whether it is by Palestinians, Iraqis, or even Syrians,” said Mohammad al-Khawaldeh, a retired general and a strong opponent to granting full citizenship rights. “In any society, granting full political rights to one group would be at the expense of other groups.”

Habashna disagreed, calling the Palestinian issue “an excuse for officials to hang their lack of commitment to ending discrimination against women”.

“If that was a good, sound reason, why do they grant full citizenship rights to children of Jordanian men who marry Palestinian women?” she added.

In response to this, Khaled Kalaldeh, the minister of political development, noted that under Islamic law, men are responsible for Nafaqah (providing financial support for his wife and children during and after marriage). “Activists have to choose whether we apply Islamic law or not. If they drop their right to Nafaqah, then they can demand full citizenship rights to their children,” he told Al Jazeera.

The new measures, analysts say, are an attempt by the Jordanian government to reach a compromise, addressing the needs of Jordanian women while also taking regional politics into consideration.

“They must have been between a rock and a hard place in this issue,” said Abeer Dababneh, a professor with the University of Jordan’s women’s studies department. “They had to meet some of their obligations to human rights treaties by addressing basic human rights needs, while being very careful with the political question of Palestine.”

But as the “benefits” hinge upon the prime minister’s decision and are not codified in any law, women fear they could change anytime. “I am left with so many questions; will these benefits be interrupted if one of our children has a job offer abroad for a year or so?” Zoubi said. “Or will they end if we die?” 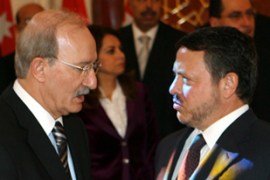 Cabinet likely to pursue reforms and support Middle East policies of the US. 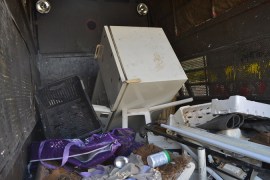 Scavenging for a living in Jordan

Amid Syrian refugee influx, Jordan is facing a conundrum over how to support its own impoverished residents.