The United States and Cuba have agreed to restore diplomatic ties that Washington severed more than 50 years ago, and President Barack Obama has called for an end to the long economic embargo against its old Cold War enemy.

“Today the US is changing its relationship with the people of Cuba. We’ll begin to normalise relations between our two nations. Through these changes, we intend to create more opportunities for the American and Cuban people and begin a new chapter,” Obama said on Wednesday.

A day earlier, after 18 months of secret talks, Obama and Cuban President Raul Castro agreed in a phone call on a breakthrough prisoner exchange, the opening of embassies in each other’s countries, and an easing of some restrictions on commerce.

Havana released a US citizen, Alan Gross, who had been jailed for five years in Cuba, and an intelligence agent who spied for the US and was held for nearly 20 years.

Cuba’s jailing of Gross, convicted for importing banned technology and trying to establish clandestine internet service for Cuban Jews, had been a major obstacle in improving ties.

The US in return freed three Cuban intelligence agents who had served 16 years in US jails for spying on Cuban exile groups in Florida.

In a televised address, Castro said the Cubans’ release was a cause of “enormous joy for their families and all of our people”.

He also praised Obama for agreeing to the prisoner exchange and pushing for a new relationship with Cuba.

“This decision by President Obama deserves respect and recognition by our people,” Castro said, speaking at the same time that Obama announced his administration would restore diplomatic relations.

Castro thanked Pope Francis, the Vatican and Canada for helping Havana and Washington reach their historic accord.

Obama said he had instructed Secretary of State John Kerry to immediately initiate discussions with Cuba on the re-establishment of diplomatic relations with Cuba, which were severed in 1961.

“In the coming months, we will re-establish an embassy in Havana and carry out high-level exchanges and visits between our two governments as part of the normalisation process,” Obama said.

Al Jazeera’s Patty Culhane, reporting from Washington, said the trade embargo imposed on Cuba after ties were severed can only be lifted by Congress.

“Senior administration officials tell me they don’t think Congress is going to lift the embargo. We have seen several members of Congress come out and call the president’s moves ‘outrageous’,” she said.

Republicans, who will control both houses of Congress from January, oppose normal relations with the Communist-run island.

“Relations with the Castro regime should not be revisited, let alone normalised, until the Cuban people enjoy freedom – and not one second sooner,” said House Speaker John Boehner.

“There is no `new course’ here, only another in a long line of mindless concessions to a dictatorship that brutalises its people and schemes with our enemies.”

The three Cubans released in the prisoner exchange were celebrated as heroes back home.

Gerardo Hernandez, Ramon Labanino, and Antonio Guerrero, who spent more than 15 years behind bars, were the last remaining prisoners from the “Cuban Five”, a group arrested in Miami in September 1998 and convicted in 2001 of spying for Cuba’s government. 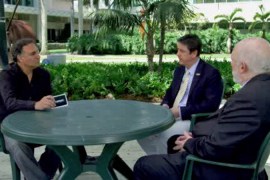 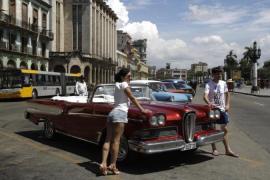 It takes two to salsa, but is this the cha-cha-cha of change in US-Cuba relations? 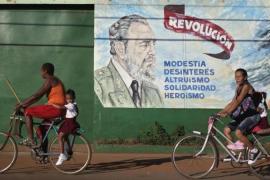 US pressed to end 54-year-old economic embargo, as 15 Caribbean nations meet in Havana for summit.