At least 130 people, mostly students, have been killed in an attack by Pakistani Taliban at a Peshawar school.

The attack has sent shockwaves across the world, and has been widely condemned.

Malala Yousafzai – “I am heartbroken.”

“I am heartbroken by this senseless and cold blooded act of terror in Peshawar that is unfolding before us. Innocent children in their school have no place in horror such as this. I condemn these atrocious and cowardly acts and stand united with the government and armed forces of Pakistan whose efforts so far to address this horrific event are commendable. I, along with millions of others around the world, mourn these children, my brothers and sisters – but we will never be defeated.”

Nawaz Sharif – “These were my kids”

Pakistan’s Prime Minister Nawaz Sharif called the attack a national tragedy and announced three days of nationwide mourning, at a press conference after an emergency meeting.

“This is a national tragedy. These were my kids. This is my loss. The Peshawar attack is an absolutely cowardly act. The government, in collaboration with Pakistan’s army will take the decision on fighting terrorism. We won’t stop until terrorism is stopped.”

He tweeted: ” It is a senseless act of unspeakable brutality that has claimed lives of the most innocent of human beings – young children in their school.”

“My heart goes out to everyone who lost their loved ones today. We share their pain and offer our deepest condolences.”

“The horrific, callous killing of more than one hundred children today in Peshawar, Pakistan must do more than shock the conscience of the world – as it will.

It must also summon us, all the more, to support the parents of Pakistan who wish for their children the best possible education – and all those who are working to provide it.

UNICEF extends our heartfelt sympathy to the families of the children who have been lost.  We mourn with them.”

The White House released a statement from US President Barack Obama condemning the attack:

“The United States condemns in the strongest possible terms today’s horrific attack on the Army Public School in Peshawar, Pakistan.  Our hearts and prayers go out to the victims, their families, and loved ones.  By targeting students and teachers in this heinous attack, terrorists have once again shown their depravity.  We stand with the people of Pakistan, and reiterate the commitment of the United States to support the Government of Pakistan in its efforts to combat terrorism and extremism and to promote peace and stability in the region.

Father of 14-year-old killed at #PeshawarAttack : “My son was in uniform in the morning. He is in a casket now.”

Father of 14-year-old killed at #PeshawarAttack: "My son was in uniform in the morning. He is in a casket now."

The hashtag #PeshawarAttack is trending globally: 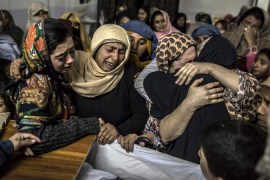 Gunmen kill 141, 132 of them children, as the Pakistani Taliban storms school in one of nation’s bloodiest ever attacks.