Australians have taken to social media in solidarity with the country’s Muslim community to counter concern about an anti-Muslim backlash, after a gunman took an unknown number of people hostage at a cafe in Sydney’s financial and shopping district.

Amid uncertainty about the hostage-taker’s motives and fears of reprisals after a flag bearing the Islamic proclamation of faith, was raised in the cafe, some Australians created the hashtag,  #illridewithyou  in a bid to show solidarity with local Muslims who might feel threatened.

Al Jazeera’s Andrew Thomas, reporting from Sydney, said there was some reported racist sentiments towards Muslims especially on public transport following the standoff at the cafe.

The hashtag trended globally on Twitter rapidly and in response, Australia’s race discrimination commissioner Tim Soutphommasane said he was heartened by the campaign adding, “let’s not allow fear, hatred and division to triumph.”

More than 40 Muslim groups condemned the siege, saying in a statement that they rejected “any attempt to take the innocent life of any human being or to instil fear and terror into their hearts”.

If you reg take the #373 bus b/w Coogee/MartinPl, wear religious attire, & don’t feel safe alone: I’ll ride with you. @ me for schedule.

The tweet resonated with social media users prompting the hashtag:

Practical thing: I’ve made a temporary sticker for my bag so people who need me can spot me #illridewithyou pic.twitter.com/aVldEn9wVU

Practical thing: I've made a temporary sticker for my bag so people who need me can spot me #illridewithyou pic.twitter.com/aVldEn9wVU

The hashtag then trended globally:

The statement that the campaign carries was reinforced with references to similar historical examples: 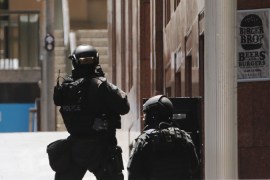