Twin bomb blasts have hit a market in the central Nigerian city of Jos, killing at least 32 people and injuring dozens others, media reports say.

Thursday’s attack took place shortly after 6pm local time (17:00 GMT) near the site where a similar attack killed scores in May. It happened on the same day that the ruling party and the opposition officially named their presidential candidates.

A police spokesman told Al Jazeera that two suicide bombers were responsible for the explosions.

The blasts occurred as store owners were shutting their shops and Muslims were preparing for evening prayers.

Abdulsalam Mohammed, a spokesman for t he National Emergency Management Agency,  said staff were combing through the areas where the explosions occurred for IEDs that may have been planted by the perpetrators.

Witnesses told the AP news agency that one blast went off at an outdoor food stand and the other at the nearby entrance to the Terminus market in the centre of the city.

The Nigerian medical association put out a call on radio and television calling on doctors off duty to go to the three hospitals where victims were admitted to assist their colleagues.

There has been no claim of responsibility for Thursday’s attack.

At least 118 people died in an attack on the same area last May.

The city, which is the capital of Plateau state, lies in Nigeria’s “Middle Belt” where the mainly Muslim north meets the mostly Christian south.

It has been targeted by Boko Haram fighters in the past but is also a hotbed of ethnic and sectarian tensions that frequently boil over into deadly violence. 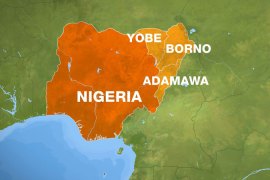 At least 40 people killed, including five soldiers, in attack on bus station in Nigeria’s northeast. 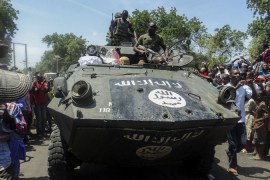