Bangladeshi fishermen, using sponges and sacks, have begun cleaning up a huge oil spill in a protected area that is home to rare dolphins, after environmentalists warned of an ecological “catastrophe”.

Thousands of litres of oil have spilled into the protected Sundarbans mangrove area, home to rare Irrawaddy and Ganges dolphins, since a tanker collided with another vessel on Tuesday.

The tanker was believed to be carrying around 350-thousand litres of furnace oil at the UNESCO World Heritage site.

The government has sent a ship carrying oil dispersants to the area. However, environmentalists say the chemicals could harm the delicate ecology of the Sundarbans.

The head of the local port authority told reporters that fishermen would use “sponges and sacks” to collect the spilled oil, which has already spread over an 80-kilometre area.

However, Amir Hosain, chief forest official of the Sundarbans, admitted authorities were in the dark about what to do for the best.

“This catastrophe is unprecedented in the Sundarbans and we don’t know how to tackle this,” he told AFP news agency.
“We’re worried about its long-term impact, because it happened in a fragile and sensitive mangrove ecosystem.”

Officials said the damage had already been done as the slick had spread to a second river and a network of canals in the Sundarbans.

Rubayat Mansur, Bangladesh head of the New York-based Wildlife Conservation Society, said most of the oil appeared to have already leaked out.

“I visited the sunken trawler this morning. Only few hundred litres of oil remain inside, so almost all the oil has spilled into the Sundarbans,” he said.

Mansur said oil dispersants were “not appropriate for the mangrove ecosystem” and urged local villagers to help collect the oil from nets that have been placed in the river to contain its spread.

Bangladesh set up sanctuaries in the Sundarbans in 2011 after studies showed there were hundreds of endangered river dolphins there.

Fishing is banned, but tankers and other boats are allowed to pass through. 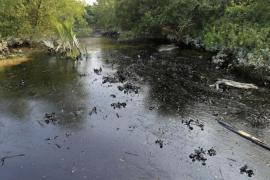