A Palestinian official has said that the autopsy on Ziad Abu Ein’s body proves that Israel’s actions led to the death of a Palestinian minister, while Israel disagrees with the findings of the same autopsy.

Abu Ein died on Wednesday shortly after an Israeli border policeman shoved and grabbed him by the throat during a protest in the occupied West Bank.

Thousands of Palestinians attended his funeral in Ramallah on Thursday. Israel has beefed up its security forces in the West Bank as fresh protests were expected over the minister’s death.

The head of the Palestinian civil affairs, Hussein Al Sheikh, told a Palestinian radio that the autopsy, which was carried out overnight, showed Abu Ein died because of a beating by Israeli soldiers and inhaling large amounts of tear gas, adding that Israelis delayed his transfer to the hospital.

He also said the Israeli forensic expert, who was present at the postmortem, agreed to the findings of the autopsy.

However, the Israeli side rejected agreeing to the findings.

“Israeli officials said that heart attack was the reason why the minister died, adding that it might have been brought on when was he grabbed in the neck by an Israeli soldier,” Al Jazeera’s Imtiaz Tyab, reporting from West Jerusalem, said.

Tyab said that two Jordanian and one Israeli expert were present at the autopsy, which was concluded in the early hours of Thursday.

Abu Ein, 55, was among scores of Palestinian and foreign activists who were confronted at an Israeli checkpoint while heading to a demonstration against Jewish settlements in the occupied territory.

Around 30 Israeli soldiers and border policemen fired tear gas and sound grenades at the group and a scuffle ensued in which a border policeman pushed Abu Ein and grabbed his neck firmly with one hand.

Footage of the incident did not show Abu Ein responding with any violence.

Minutes later the minister began to look faint and fell to the ground clasping his chest. He died on his way to the hospital.

His family told Haaretz newspaper that he suffered from diabetes and high blood pressure.

On Wednesday, Palestinian President Mahmoud Abbas accused Israeli soldiers of killing Abu Ein, calling him a victim of a “clear crime” and a “barbaric act”.

Abbas met officials from his Fatah movement and the Palestine Liberation Organisation late in the evening to consider a response and said all options were open.

In the session, Abbas held up a photo of the Israeli officer grabbing Abu Ein’s throat.

Calls grew for Abbas to suspend security coordination with Israel – a policy that has become the cornerstone of relations between Israel and the Palestinian Authority in the absence of peace talks.

Abdullah Abu Rahmeh, a Palestinian activist who was at the protests, told Al Jazeera that Abu Ein fell into a coma after an Israeli security officer beat him with his helmet.

“It was a peaceful protest; the Israeli soldiers do not know how to deal with this type of action and they used violence to threaten us,” he said.

“We are sorry about his [Abu Ein’s] death,” Israeli Defence Minister Moshe Yaalon said in a statement. He said Israel was investigating the incident.

“Security stability is important for both sides and we will continue coordinating with the Palestinian Authority,” he added.

The incident comes at a time of heightened tension between Israel and the Palestinians, following months of violent unrest in Jerusalem, Tel Aviv and the Israeli-occupied West Bank.

On Wednesday, the Israeli military said it was sending two battalions of soldiers and two companies of paramilitary border police to the West Bank as reinforcements.

After news of Abu Ein’s death spread, clashes broke out in a refugee camp near Ramallah and an Israeli soldier shot and critically wounded a Palestinian youth, Palestinian medics said.

Shops in Ramallah were shuttered for the day in protest at the minister’s death.

Abu Ein, who was convicted of killing two young Israelis in a bomb attack in 1979 and released as part of a prisoner swap in 1985, was a vocal opponent of Israel’s settlement expansion in the West Bank, which Palestinians want as part of an independent state together with the Gaza Strip and East Jerusalem.

A leader of Palestinian civil society groups for decades, Abu Ein was a regular attendee of non-violent protests and was appointed this year to head a government-backed protest group, the Committee to Resist Settlements and the Wall.

UN Secretary-General Ban Ki-moon called on the Israeli authorities to “conduct a swift and transparent investigation” into the circumstances of what he called the “brutal death” of the minister.

The US made a similar demand for a fair probe.

“At this difficult time, we continue to call on both sides to work to lower tensions and prevent an escalation of violence,” State Department spokeswoman Jen Psaki said.

Shortly before his death, Abu Ein spoke to television reporters, sounding hoarse and short of breath. 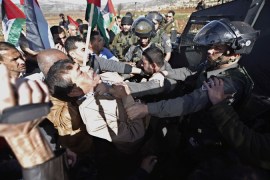 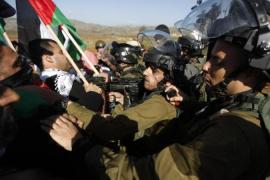 Death of Abu Ein is an opportunity to reconsider coordination between Israel and Palestinian Authority, activists say.