A US Senate report on harsh techniques employed to interrogate “terror” suspects post-9/11 attacks has condemned the CIA for brutality and deception.

The heavily redacted 480-page report – published on Tuesday – covered the treatment of around 100 suspects rounded up by US operatives between 2001 and 2009 on terrorism charges.

The full 6,200-page report remains classified. Ahead of the publication of the report, the US had tightened security at its embassies across the globe.

“There are those who will seize upon the report and say see what the Americans did? And they will try to use it to justify evil actions or incite more violence,” said Feinstein. “We can’t prevent that, but history will judge us by our commitment to a just society governed by law and the willingness to face an ugly truth and say never again.”

The report said harsh CIA interrogations produced much bad information, including a fake story about al-Qaeda recruiting African-Americans. It said the interrogations were ineffective and never produced information that led to foiling of “imminent terror threat”.

The report followed a five-year investigation by the Senate Intelligence Committee into the programme. The CIA maintained the harsh techniques were effective and foiled terrorist plots.

The report said the CIA misled the public and policymakers about the programme, much of which was developed, operated and assessed by two outside contractors.

The tactics discussed in the document include threats that Abd al-Rahim al-Nashiri, a suspect in the 2000 bombing of the USS Cole, would have his mother “brought before him and sexually abused.” He was also threatened with a power drill.

The report said some detainees were forced to stay awake for over a week at a time, and that several detainees suffered from “hallucinations, paranoia, insomnia and attempts at self-harm and self-mutilation.”

Reacting to the report, US President Barack Obama said the CIA actions “were contrary to our values”.

“I hope that today’s report can help us leave these techniques where they belong – in the past. Today is also a reminder that upholding the values we profess doesn’t make us weaker, it makes us stronger and that the United States of America will remain the greatest force for freedom and human dignity that the world has ever known,” he said in a statement.

Unless this important truth-telling process leads to prosecution of the officials responsible, torture will remain a 'policy option' for future presidents.


The enhanced interrogation programme was dismantled by Obama in 2009.

Al Jazeera’s Patty Culhane, reporting from outside the White House in Washington DC, said the aim of the report was to guarantee that torture was never used again in any sort of covert programme.

“But it is not exactly clear why the Senate has that confidence. Remember, no one was prosecuted for the programme,” said Culhane.

Another Al Jazeera correspondent, Kimberly Halkett, reporting from Capitol Hill in Washington DC, said it was unclear what Congress would do next.

“It is hard to say what Congress will do, because Congress had plenty of opportunities to do something and yet did not,” said Halkett.

Amnesty International said the report makes clear that the CIA was acting unlawfully “from day one” and its brutal interrogations were not a rogue operation.

Steven Hawkins, executive director of Amnesty’s US branch, said the programme “gave the green light to commit the crimes under international law of torture and enforced disappearance — with impunity. It’s time for accountability, including a full investigation, prosecutions and remedy for victims.”

He noted that the Obama administration had ended many of the practices described in graphic detail in the report.

But Roth added: “Unless this important truth-telling process leads to prosecution of the officials responsible, torture will remain a ‘policy option’ for future presidents.” 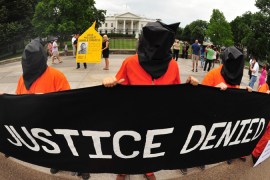 Independent study says doctors and nurses aided in torture of US prisoners in Afghanistan, Guantanamo and CIA prisons. 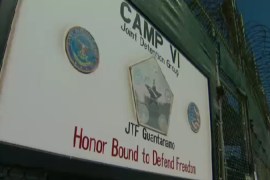 CIA accused of misleading US on torture

Senate report, says torture programmes contributed almost nothing to US war against al-Qaeda.