A minister in the Palestinian Authority, Ziad Abu Ein, has died after being beaten by Israeli security forces and inhaling tear gas during a protest in the occupied West Bank, witnesses say.

Abu Ein, 55, was leading a group of Palestinians on Wednesday to plant olive trees near the village of Turmusayya, northeast of Ramallah, when he was accosted by Israeli soldiers.

In addition to being beaten, he choked on tear gas and was hit in the chest by Israeli soldiers, according to a Palestine TV reporter who was at the scene.

Abdullah AbuRahmeh, a Palestinian activist who was at the protests, told Al Jazeera Abu Ein fell into a coma after an Israeli security officer beat him with his helmet.

“It was a peaceful protest; the Israeli soldiers don’t know how to deal with this type of action and they used violence to threaten us,” he said.

Witnesses, including an Israeli journalist and a Reuters news agency photographer, also said Abu Ein had been beaten by the soldiers during the protest. Others said he was headbutted and then collapsed.

An Israeli army spokesperson told Al Jazeera they were looking into the incident.

Al Jazeera’s Imtiaz Tyab, reporting from West Jerusalem, said tensions had been running high in Israel and the Palestinian territories, with continuous protests in the West Bank in the past several weeks.

“The fact that a member of the government has died in these protests will further inflame the situation,” he said.

Abu Ein, a father of four, did not hold a portfolio but was the head of Anti-Wall and Settlement Commission in the Palestinian Territories.

He previously held the position of deputy minister of prisoners’ affairs.

As a former detainee himself, he was sentenced to life in prison by Israel in 1982 but was released in a prisoner swap in 1985.

Activists who were with Abu Ein said they were planting olive trees by the illegal settlement of Adei Ad when the Israeli security officers attacked them and fired large amounts of tear gas at the group.

Pictures of Abu Ein, who is a member of Fatah’s Revolutionary Council, showing him knocked out and on the ground quickly circulated on social media sites.

IDF reviewing occurrences at demonstration leading to the reported death of a Palestinian. Updates to follow.

Palestinian President Mahmoud Abbas condemned the death of Abu Ein, calling it a “barbaric act which cannot be tolerated”.

Abbas accused Israel of murdering his minister. He also added that “all necessary steps” would be taken after an investigation into Abu Ein’s death is carried out.

Abu Ein’s body will be undergoing an autopsy either on Wednesday or Thursday, sources said. 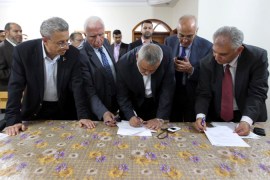