At least 23 people have been killed, many of whom in central Philippines, after Typhoon Hagupit hit, Red Cross officials say.

Richard Gordon, chairman of the Philippine National Red Cross, told Al Jazeera on Monday that most of the fatalities were from the province of Eastern Samar.

“We hope it [death toll] won’t go up anymore, but the reality is it may likely still go up.”

Earlier reports suggested that only three people had died after the typhoon struck, forcing more than a million into shelters.

Floods, damaged shanties and ripped off tin roofs were a common sight across the region on Monday, as Hagupit headed towards Manila.

The typhoon, which made landfall in Eastern Samar late on Saturday, has weakened considerably and was moving slowly, dumping heavy rain.

Al Jazeera’s Andrew Thomas, reporting from the city of Batangas, said the rainfall could trigger landslides and flash floods.

He reported that most government offices, schools and private businesses in Manila remained shut.

Traumatised by the death and destruction from Typhoon Haiyan last year, more than a million people fled to more than 1,000 emergency shelters and safer grounds as Hagupit approached.

Manila Mayor Joseph Estrada said more than 3,000 residents of a shantytown on the edge of Manila Bay had been evacuated due to possible storm surges.

Metropolitan Manila has a population of more than 12 million people.

Two people, including a baby girl, died of hypothermia in central Iloilo province on Saturday at the height of the typhoon, disaster-response agency chief Alexander Pama told a news conference.

Another person died after being hit by a falling tree in the eastern town of Dolores, where the typhoon first made landfall, according to Interior Secretary Mar Roxas.

Displaced villagers were asked to return home from emergency shelters in provinces where the danger posed by the typhoon had waned, including Albay, where more than half a million people were advised to leave evacuation sites.

Nearly 12,000 villagers, however, will remain in government shelters in Albay because their homes lie near the restive Mayon volcano. 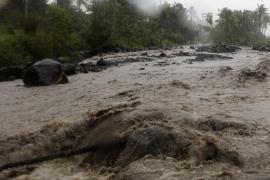 The storm has landed in the Philippines, destroying homes, downing trees and forcing thousands to flee from villages. 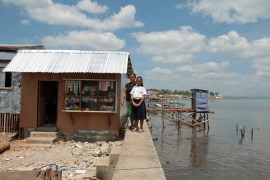 One hundred days since Typhoon Haiyan

Parts of the Philippines affected by the storm remain a long way from recovery, and aid is drying up. 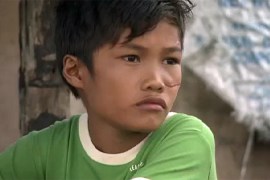 In the final part of a special series on Typhoon Haiyan, Al Jazeera revisits the Philippines, 100 days after the storm.