Indian police have arrested a suspect in connection with the alleged rape of a passenger, according to an official in the capital New Delhi.

Police said they tracked down the driver from the international taxi-booking service Uber late on Sunday after he had abandoned the vehicle and fled to his native Uttar Pradesh state.

“The accused has been arrested from Mathura [city] with the help of Uttar Pradesh police. He is being brought to Delhi,” Madhur Verma, deputy police commissioner of the northern part of New Delhi, said.

The driver allegedly sexually assaulted the 25-year-old woman before threatening to kill her if she alerted police.

The woman, an executive for a finance company, dozed off in the taxi as she was returning home from dinner with friends on Friday night, according to media reports.

The woman told police she woke to find the taxi parked in a secluded place where the driver assaulted and raped her, before dumping her near her home in north New Delhi.

The woman took a photograph of the car’s number plate and then reported the crime to police, an officer told the Press Trust of India news agency.

Deepak Mishra, Delhi special police commissioner, criticised the US-based Uber over the attack, saying early investigations showed GPS had not been installed in the taxi and mandatory police background checks were not conducted on the driver.

“Our initial investigations have revealed the shortcomings of the private [taxi] company which didn’t have GPS installed in its cabs and the staff wasn’t verified,” he told AFP.

Uber has been gaining popularity in India, especially among young, urban workers who use its smartphone app to connect with and pay for local drivers.

In a statement late on Sunday, the company said it “has a GPS trace and record of all trips”.

Earlier, Uber said the driver’s licence had been suspended while Evelyn Tay, a company spokesperson, said in a statement: “Safety is Uber’s highest priority and in India we work with licensed driver-partners to provide a safe transportation option.”

The fatal gang-rape of a student on a moving bus in New Delhi in December 2012 stirred outrage about the high number of attacks of women in India and inadequate efforts to keep them safe.

The nationwide outcry led the federal government to rush through legislation doubling prison terms for rapists to 20 years and criminalising voyeurism, stalking and the trafficking of women.

The law also makes it a crime for officers to refuse to open cases when complaints are made.

Official statistics say about 25,000 rapes are committed every year in India, a nation of 1.2 billion people.

Activists, though, say that number is just a tiny percentage of the actual number, since victims are often pressed by family or police to stay quiet about sexual assaults. 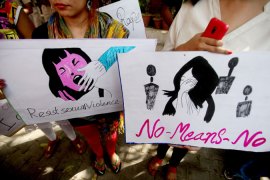 Rape in India: Reading between the lines

There are number of reasons for rapes in country ranging from misogyny and caste prejudice to poverty and more. 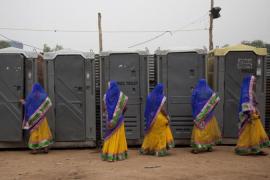 Women need to feel safe in public, not hide in private. 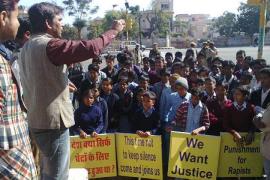