The Israeli army has shot and wounded a Palestinian woman after she stabbed an Israeli civilian near a Jewish settlement bloc in the southern part of the occupied West Bank, police said.

Witnesses told Al Jazeera that 23-year-old Amal Jihad Taqatqa from Bethlehem arrived at the Gush Etzion settlement bloc on Monday and stabbed the civilian with a knife, injuring him lightly.

“According to the police, the woman approached an Israeli soldier with the intention of stabbing him but was unable to do so. So she then used her knife to harm a passerby, an Israeli civilian, who was apparently only lightly injured,” Al Jazeera’s Nisreen El-Shamayleh reported from Ramallah.

Police released a statement saying that the Israeli civilian suffered minor injuries in the stabbing at the settlement bloc south of Bethlehem, and that the Palestinian woman was transferred to a hospital for further medical treatment.

Media reports said she was in critical condition.

Local sources told Al Jazeera that Taqatqa’s house in Bet Fajjar, south of Bethlehem, has been raided by Israeli forces and that they have also arrested her father.

The Gush Etzion junction is a business, commercial and tourism centre in the southern West Bank, which serves as the entry point to the Gush Etzion bloc of settlements.

Later on Monday, police said an Israeli bus was pelted with stones by Palestinians elsewhere in the West Bank. No one was injured in the attack.

Jerusalem and the West Bank have seen a number of violent attacks in recent weeks.

Israeli-Palestinian tensions have been soaring since June, when Palestinians kidnapped and killed three Israeli settlers in the West Bank. Israelis retaliated by abducting and burning alive a Palestinian teenager in East Jerusalem.

The kidnappings set off a series of events that led to the 50-day Gaza war, which left more than 2,100 Palestinians and 71 Israelis dead.

Competing claims to a holy site in Jerusalem’s Old City has also added to the tensions, as well as anger over illegal settlements on Palestinian land. 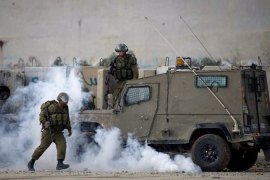 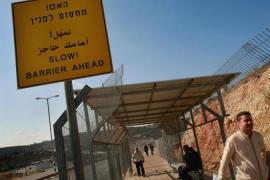 One Palestinian killed, two others injured after they were run over by bus with Israeli number plate in Bartaa village. 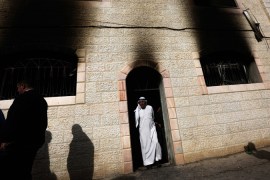 Mosque in occupied region set on fire amid soaring tensions between Palestinians and Israeli settlers.