US President Barack Obama has authorised the deployment of up to 1,500 additional troops to Iraq in order to help train and advise government and Kurdish forces fighting the armed Islamic State of Iraq and the Levant (ISIL) group, the White House has said.

“As a part of our strategy for strengthening partners on the ground, President Obama today authorised the deployment of up to 1,500 additional US military personnel in a non-combat role to train, advise, and assist Iraqi Security Forces, including Kurdish forces,” the statement said on Friday.

The Obama administration will ask Congress for $5.6bn for the operations in Iraq and Syria, which includes $1.6bn for the new “Iraq Train and Equip Fund,” the White House Office of Management and Budget said.

The deployment will roughly double the number of US troops in the country.

Some of the advisors will be deployed to western Anbar province, where the Iraqi army has been forced to retreat from advancing ISIL fighters, a defence official who spoke on condition of anonymity told AFP news agency.

Some of the additional troops will begin to arrive in Iraq in the next several weeks, the official said.

Defense Secretary Chuck Hagel recommended the move to Obama based on a request from the Iraqi government and the assessment of US Central Command, which is overseeing the air war against ISIL, the Pentagon said.

The deployment coincides “with the development of a coalition campaign plan to defend key areas and go on the offensive” against ISIL fighters who have grabbed large areas of Iraq and neighbouring Syria, it said.

The training sites will be located in northern, western, and southern Iraq and “coalition partners will join US personnel at these locations to help build Iraqi capacity and capability,” it added.

Obama had previously authorised up to 1,600 troops. His decision on Friday will raise the maximum troop footprint to 3,100.

The US president had resisted keeping troops in Iraq earlier in his term, vowing to end the American presence that began with the 2003 invasion and continued as an occupation through 2011.

ISIL has declared a “caliphate” in territorries in Iraq and Syria it controls, committing widespread atrocities in the areas.

US-led coalition’s fighter jets have been bombing the group’s targets in Iraq and Syria, supporting the ground struggle carried out by the government and Kurdish forces.

ISIL considers Shia Muslims, Christians and members of other religions to be heretics and frequently attacks them. 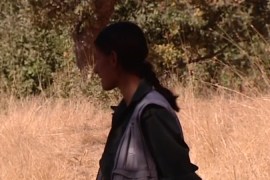