By Al Jazeera Staff
Jerusalem —  Amid heightened tensions at Jerusalem’s al-Aqsa mosque, the Palestinian Minister of Awqaf and Religious Affairs, Sheikh Yousef Adeis, has called on the international community to push for the site’s protection.

Weeks of clashes at the al-Aqsa compound reached a climax this week, as Israeli security forces stormed the mosque, triggering confrontations between riot police and Palestinian worshippers.

Adeis says Arab and Muslim decision-makers must broach the threat to al-Aqsa with UNESCO, the UN’s cultural arm, and provide daily updates on Israel’s “aggressive acts” to the UN Security Council.

“Muslims and Arabs should develop a united stance towards defending the mosque… Israel, by its aggressive acts, is pushing for religious warfare that would have dreadful consequences on the region,” Adeis said.

I'm calling upon all Muslims worldwide to support Jerusalem and its people against the daily Israeli assaults on their rights.

Financial support should also be increased, he said, to deter Palestinians from abandoning their homes in the Old City, where al-Aqsa is located: “I’m calling upon all Muslims worldwide to support Jerusalem and its people against the daily Israeli assaults on their rights.”

Under long-standing arrangements, Jews are allowed to visit al-Aqsa but are forbidden to pray, for fear of religious unrest. The site is Judaism’s holiest, believed to be the site of the Biblical temples, and the third-holiest in Islam. Jewish hardliners have been ramping up demands to be allowed to pray at the Muslim-run site.

On Thursday, Israeli Prime Minister Benjamin Netanyahu assured Jordan’s King Abdullah II that he would not yield to those demands, after Jordan recalled its ambassador to Israel in protest against the “unacceptable” police assault on the mosque.

“We’re keeping the status quo on the Temple Mount,” Netanyahu said, using the Jewish name for the compound, which has seen frequent clashes between stone-throwing Palestinians and Israeli riot police.

On Friday, Israel’s chief rabbi, Yitzhak Yosef, told Jews to stop ascending the plateau to pray, calling it a religious crime. “We must stop this,” he said at a funeral service for a 17-year-old killed in a hit-and-run attack in Jerusalem  earlier this week .

Senior members of Netanyahu’s government, including deputy Knesset speaker Moshe Feiglin, have been among the loudest voices pushing to change the status quo. Economy Minister Naftali Bennett, the head of the right-wing Jewish Home party, criticised the chief rabbi’s decree.

Israeli police had said they would prevent men under 35 from entering the compound for Friday prayers, fearing clashes. Similar restrictions have been imposed almost every week since July, when unrest in Jerusalem began after the abduction and murder of a Palestinian teenager.

There were brief scuffles outside the mosque compound as worshippers entered, but the morning otherwise passed uneventfully. Several hundred young men barred from entering gathered to pray on the streets outside the Old City.

Heavy clashes were reported in Ramallah, in the occupied West Bank, where Palestinians organised protests over the recent violence at the mosque. At least 17 people were hurt, according to the Red Crescent.

Meanwhile, Adeis says he has been particularly concerned about  a proposed bill that would allow Jews to pray on the mount. The legislation, which Netanyahu opposes, would carve out specific times for Jewish worship.

“The threat now facing al-Aqsa overrides in danger the individual and daily sporadic violations that used to happen before in an organised manner by Israelis,” Adeis told Al Jazeera. “Israel is following a more comprehensive and coherent plan with clearer objectives to… divide the holy site.” 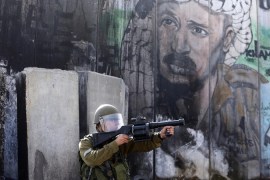 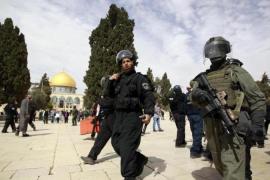 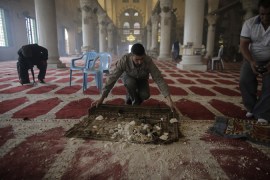