At least four protesters have been killed and scores of others injured in Cairo after thousands took to the streets of the Egyptian capital against the government of President Abdel Fatah el-Sisi, heeding to a call by the opposition Salafi Front.

The protesters were killed  on Friday after security forces opened fire in the district of Matrya in eastern Cairo, witnesses told Al Jazeera.

The protests by the Salafi Front, a faction concentrated in parts of the Nile Delta, are being held at the same time as regular Friday demonstrations that have been held by supporters of the now banned Muslim Brotherhood since the toppling of President Mohamed Morsi.

On its Facebook page, the Salafi Front has called for a “Muslim Youth Uprising” to “topple military rule in Egypt,” urging followers to “raise your Quran”.

The protests are the first attempt in months to hold large demonstrations in the country. More than a 100 people were arrested in advance of the Salafist demonstrations.

Meanwhile, three senior army officers were killed in separate shooting incidents by unidentified assailants. Two were shot in Cairo while a navy officer was killed in Alexandria. Two army conscripts were also injured.

The attacks occurred despite heightened military and police presence in the capital in view of the latest demonstrations.

Security forces deployed in Cairo’s central Tahrir Square and in other strategic spots around the country from Thursday evening, the Associated Press news agency said.

Many Egyptians say they are cancelling social gatherings, avoiding public transportation and remaining home on Friday.

Churches in southern provinces, where both Christians and Muslims have large concentrations, cancelled Friday services and Sunday religious classes.

The fears have been further stoked by a campaign on pro-government media, playing patriotic songs and showing army special forces deploying.

Many of the attacks have taken place in the north of the Sinai Peninsula.

Marwan Bishara, Al Jazeera’s senior political analyst, said that with the absence of a “true political solution, violence will continue to escalate”.

“More people will probably go underground and there will be more violence,” he said.

“There’s an atmosphere of fear in the country”. 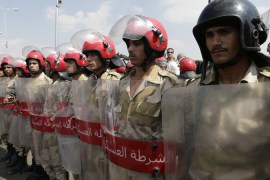 Has Sisi’s Egypt failed on security? 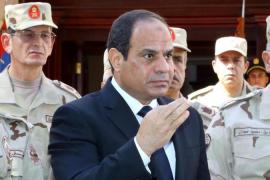 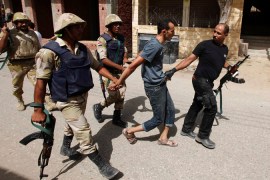