US President Barack Obama has condemned as “pure evil” the beheading of American aid worker Peter Kassig after the Islamic State of Iraq and the Levant (ISIL) released a video showing his body.

The undated video that surfaced on Sunday also showed the simultaneous beheadings of at least a dozen men described as Syrian military personnel, the latest in a series of mass executions and other atrocities carried out by ISIL in Syria and Iraq.

Kassig, who took the name Abdul-Rahman after converting to Islam, was captured in Syria last year. He was 26 years old.

“Abdul-Rahman was taken from us in an act of pure evil by a terrorist group that the world rightly associates with inhumanity,” Obama said in a statement released by the White House aboard Air Force One as he returned home from an Asia tour.

Kassig’s parents wrote on Twitter that they were “heartbroken” to learn that their son had “lost his life as a result of his love for the Syrian people and his desire to ease their suffering”.

“Fed by a strong desire to use his life to save the lives of others, Abdul-Rahman was drawn to the camps that are filled with displaced families and to understaffed hospitals inside Syria,” Ed and Paula Kassig said in their statement posted on Twitter.

Their son founded an aid group through which he trained about 150 civilians to provide medical aid to people in Syria. His group also gave food, cooking supplies, clothing and medicine to the needy.

“We know he found his home amongst the Syrian people, and the hurt when they were hurting,” his parents said.

The US confirmed that the video circulated online was authentic.

Later on Sunday, the Syrian Observatory for Human Rights said ISIL had also executed al least 13 men in Syria’s al-Raqqa city, who were arrested earlier this month after they were charged with collaborating with the Syrian regime.

Two US journalists and two British aid workers had already been beheaded by ISIL in what the group says are retaliatory killings for the US-led air campaign against its fighters in Iraq and Syria.

Aki Peritz, a former CIA analyst, said the latest beheadings were likely to boost public opinion in support of US military operations in Syria and Iraq.

“If you look at public opinion before [US journalist] Jim Foley’s beheading video about of 50 percent of Americans wanted to commit to air strikes,” he told Al Jazeera.

“As soon as the beheading video came out that number jumped to over 70 percent and this is across Republicans, Democrats and independents. So you might see a strengthening of the US position to strike ISIL targets both in Iraq and Syria.”

ISIL has executed numerous Iraqis and Syrians. In October, the group  publicly executed Iraqi news cameraman Raad al-Azzawi and three civilians in northern Iraq, according to the journalist’s relatives.

Safwan Khatib, a Syrian opposition activist, told Al Jazeera that it did not seem to matter to ISIL whether their victims were Muslims or not.

“They kill anyone they feel is against them, not just Americans,” he said. “Most likely they would kill me as well. They are giving a bad image of Islam.” 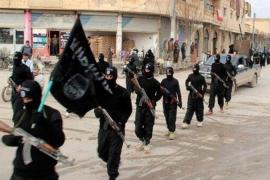