Demonstrators have set fire to the local legislature building in the capital of the southwestern Mexican state of Guerrero in protests over the apparent killing of 43 students by corrupt police and thugs from drug gangs.

The demonstrators, purportedly students and teachers, set fire to the session hall in the empty state assembly building while also torching several cars outside. Firefighters extinguished the blaze.

At least five people were injured in the clashes, local media quoted by the Associated Press news agency reported.

Anger has intensified in Mexico since Attorney General Jesus Murillo said last week that evidence suggests 43 missing trainee teachers were murdered by gangsters, incinerated in a bonfire at a garbage dump and their ashes thrown in a river.

The students were abducted by corrupt police in September, Murillo said.

The protests have led to mass cancellations this week in the hotels of Acapulco, the famous beach resort, ahead of a long holiday weekend.

On Tuesday, hundreds of protesters scuffled with riot police and burned PRI offices in Chilpancingo .

In neighbouring Michoacan state, which has also been a focal point of drug gang violence, students blocked the main entrance to the state capital’s airport on Wednesday, a state police spokesman said.

Another group of demonstrators broke windows, furniture and computers at local PRI offices in the state capital of Morelia, according to police.

RELATED: A country at the breaking point

Local media also showed images of masked people looting trucks in the state of Oaxaca, while another group took over a toll booth station in the state of Chiapas and burned several cars.

Tens of thousands of Mexicans have taken to the streets in recent weeks in peaceful protests over the government’s handling of the case of the missing students, which has become the biggest challenge yet to Pena Nieto.

The president is on a trip to China, which infuriated protesters and relatives of the students. They believe he cares more about Mexico’s business interests than trying to deal with the gang violence that has ravaged much of the country for years. 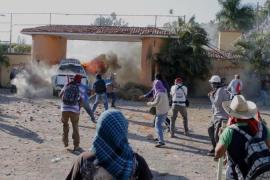 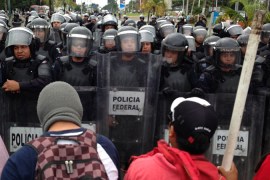 Demonstrators set fire to ruling party’s regional headquarters in Guerrero over the killing of 43 students.