It has been described as “ridiculously difficult” and has taken more than 20 years to prepare for, but on Wednesday the scientists behind a $1.5bn European space mission hope to make the first-ever landing of a spacecraft on a comet.

Launched in 2004, the European Space Agency’s Rosetta spacecraft has travelled more than 6 billion kilometres in pursuit of the comet 67P Churyumov/Gerasimenko.

The comet is travelling through space at more than 65,000 kilometres an hour, about 40 times the speed of a bullet. To catch up with it, Rosetta used the gravity of Earth and Mars to effectively sling-shot itself into the comet’s orbit.

It started its close approach to the 4km-wide comet in August. Since then it has been taking pictures and sampling the dust and gases emitted from the comet. This information has allowed scientists to decide where to attempt to land the smaller Philae lander.

The ESA team chose a flat, boulder-free area, with good sunlight which is needed to power Philae’s solar panels. The location was also visible from Rosetta, which the team plan to keep in orbit around the comet and which operates as a relay station for communications with the lander.

But 67P has very little gravity. This means landing Philae from 22 kilometers above, with little control, and keeping the probe on its surface requires special technology.

“There is a risk that the Philea lander will bounce back,” said Francisco Diego, Senior Research Fellow at the Department of Physics and Astronomy University College London. “So the three legs have shock absorbers, and instantly, as it touches down, [it] deploys a harpoon with the tether, that make sure the lander remains attached to the surface of the comet.”

The Philae lander has ten scientific instruments on board, including spectrometers to analyse chemical composition, and other instruments to examine the strength, density, texture, porosity and thermal properties of the comet. It also has a drill which can take samples from up to 23cm below the surface.

“We know that the surface of the comet is covered by interplanetary dust,” said Diego. “But inside we have the pristine material from which the solar system was formed.”

The rocks that make 67P are believed to pre-date the formation of our solar system. This is why scientists are so interested in examining them.

“When comets come past the Earth we are always interested in taking a look at the gases that are coming out of them and the chemistry of them – a very primitive primordial chemistry,” said Chris Riley, of the University of Lincoln. “In this case we are going to get really close and even sample a comet for the first time and do the measurements in situ. So it’s a trip back in time, back four and a half billion years to the birth of the solar system.”

Scientists are also eager to examine the comet to see what whether the water it carries is similar to that found on Earth. They have suggested much of the water on Earth came from comets and with it came complex organic molecules, including amino acids, the building blocks of proteins.

They hope the discoveries made on 67P will give clues into the origin and evolution of not just the Solar system, but also of life on Earth. 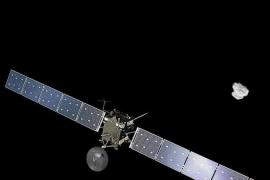 European probe Rosetta will orbit comet in decade-long mission in bid to unlock some of the secrets of the solar system. 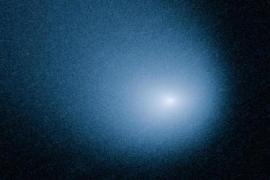 Comet in close encounter with Mars

Siding Spring passes 140,000km from the ‘Red Planet,’ 10 times closer than any known comet has ever passed by Earth. 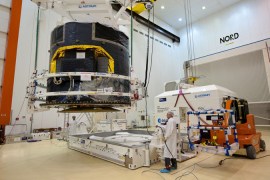