Protesters angry at the alleged massacre of 43 Mexican students have set fire to the ruling party’s regional headquarters in the southern state of Guerrero in a new demonstration over the crime.

Riot police on Tuesday chased the protesters as black smoke billowed from the two-story white building of the Institutional Revolutionary Party (PRI) in the state capital Chilpancingo.

About 1,000 people, including students and members of the radical CETEG teachers union, marched in the city armed with sticks and stones.

Violent protests have erupted in Mexico since authorities said on Friday that gang hitmen in league with corrupt police confessed to murdering the 43 students and incinerating their bodies in September.

The crime outraged Mexicans and turned into a crisis for President Enrique Pena Nieto, who was in China for a summit on Tuesday.

Authorities say gang-linked police shot at busloads of students in the Guerrero city of Iguala on September 26, in a night of violence that left six people dead.

The police then handed the 43 abducted students to the Guerreros Unidos drug gang, prosecutors say.

Authorities say Iguala’s mayor ordered police to confront the students over fears they would interrupt a speech by his wife, who aspired to succeed him.

The students had travelled to Iguala to raise funds but hijacked four buses to return home, a common practice among the young men from the college known for its left-wing politics.

Officials stopped short of declaring the students dead, stressing they were waiting for DNA results.

Attorney General Jesus Murillo Karam said experts indicated there were only two bones, including a kneecap, that could possibly be matched to DNA samples.

Parents of the missing students, who deeply distrust the government, say they will only believe their sons are dead once they get independent DNA test results.

“We want the government to do everything possible as soon as possible to find the boys alive, because they are deceiving us,” said Carlos Ivan, father of one of the missing students.

During the search for the students, other mass graves were uncovered, throwing fresh light on the problem of Mexico’s “disappeared”. 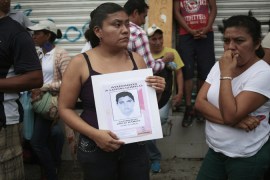