Egypt’s Ansar Beit al-Maqdis, the country’s most active armed group, pledged its allegiance to the Islamic State of Iraq and the Levant (ISIL) group, in a recording posted on its Twitter account.

If genuine, the declaration of allegiance would be a boost for ISIL which has changed its name to Islamic State, showing its widening influence in the region alongside its territorial advances in Iraq and Syria.

“We announce our pledge of allegiance to the caliph Ibrahim Ibn Awad … to listen and obey,” the audio recording said, referring to ISIL leader Abu Bakr al-Baghdadi.

In the audio clip, which is 9 minutes and 26 seconds in length, the Sinai-based armed group also urged Muslims around the world to follow suit and support ISIL.

“Your unity is strength and your division is weakness… Determine your fate, unite among yourself, and support your [Islamic] State,” the recording said.

Ansar Beit al-Maqdis, which means Partisans of Jerusalem, had previously expressed support for ISIL, but stopped short of pledging its allegiance before Monday, even denying it last week.

The group was formed during the security vacuum that followed the overthrow of longtime president Hosni Mubarak in the revolution of 2011.

It has conducted cross-border attacks against neighbouring Israel, as well as attacks on Egyptian soldiers and police.

Interior ministry spokesman Hany Abdel Latif told the AFP news agency that “the announcement would make no difference to Egypt’s fight against the self-declared jihadists”.

“They are just different names for the same terrorists,” he said.

Ansar Beit al-Maqdis on Friday threatened to escalate its assaults on Egyptian military targets, saying it was engaged in a “war without end”.

“We will continue to fight the army until the day of judgement,” said a recording posted on Twitter by the group. 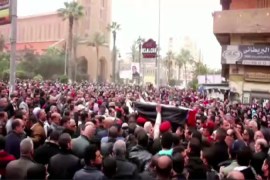 The Sinai-based armed group was founded after the July coup, and has mostly targeted military men and police forces.