Governments can keep climate change in check at manageable costs but will have to cut greenhouse gas emissions to zero by 2100 to limit risks of irreversible damage, a UN panel has said.

“Science has spoken. There is no ambiguity in their message. Leaders must act. Time is not on our side,” UN Secretary-General Ban Ki-moon said at the report’s launch in Copenhagen.

With fast action, climate change could be kept in check at manageable costs, he said, referring to a UN goal of limiting average temperature rises to 2 degrees Celsius above pre-industrial times. Temperatures are already up 0.85C.

To get a good chance of staying below 2 degrees, the report says that world emissions would have to fall to “near zero or below in 2100”.

The report, summarising 5,000 pages of work by 800 scientists already published in September 2013, will be the main handbook for 200 nations which are due to agree a UN deal to combat global warming in Paris in late 2015.

“Scientists have really tried to find the strongest possible words to describe the world we would be facing,” Kaisa Kosonen, a climate policy adviser at Greenpeace International, told Al Jazeera.

“They are talking about severe, irreversible and extreme damage to both humans and species if we don’t act fast.”

US Secretary of State John Kerry said those who ignore climate science do so at a risk to future generations, as UN experts unveiled the report.

“Those who choose to ignore or dispute the science so clearly laid out in this report do so at great risk for all of us and for our kids and grandkids,” he said.

“The longer we are stuck in a debate over ideology and politics, the more the costs of inaction grow and grow,” he added. 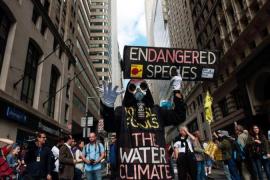 Former Costa Rican president challenges EU to think of the next generation, rather than the next ele 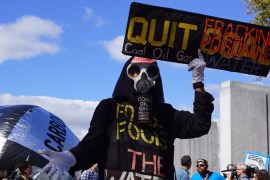 Investors are increasingly realizing that global warming is as real an economic threat as inflation.