Fighters from the Islamic State of Iraq and the Levant are within a kilometre of Kobane and US air attacks will not halt them, a Kurdish leader has said, as the group continued to bomb the Syrian-Kurdish town.

The UK-based Syrian Observatory for Human Rights said ISIL fired at least 10 rockets on Sunday into the town, on the border with Turkey, as they pressed their advance.

Idris Nahsen, a deputy foreign minister of the region, told the AFP news agency by telephone that US air raids on ISIL were not enough to stop them taking the town.

“They are not enough to defeat terrorist groups. The strikes are helping but we need heavy weaponry, armoured vehicles, cannons, rockets. They are one kilometre away in some places and two or three kilometres in others”.

Fighting for Kobane has raged for weeks. Kurdish fighters have managed to hold the town as dozens of surrounding villages fell to ISIL.

At least 186,000 people have crossed the border to Turkey, according to the government, and are now sheltering in refugee camps.

The observatory and the Kurdish YPG movement, which is fighting ISIL, said heavy clashes raged overnight, as the US-led coalition launched air raids on ISIL positions around Kobane.

The YPG told Al Jazeera that about 20 ISIL fighters and 10 YPG fighters were killed in the clashes.

Shelling could be heard from the Turkish side of the border, and pillars of smoke rose over the town.

The Reuters news agency reported that five people were injured on the Turkish side of the border when a mortar shell hit a house. 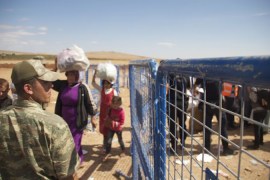 Turkey ‘there just to watch’ in Kobane