A Syrian government helicopter has dropped two barrel bombs on a camp for people displaced by fighting in the country’s north, reportedly killing dozens and charring some bodies beyond recognition.

Activists in Syria told Al Jazeera that 40 people were killed as the bombs were dropped on a camp near al-Habeet in the northern province of Idlib on Wednesday.

However the British-based Syrian Observatory for Human Rights, which tracks violence in the civil war, said 10 civilians died.

One activist told Al Jazeera that mostly women and children were killed and that no presence of armed groups was reported in the vicinity of the camp.

He said dozens of injured people were rushed to a hospital 30 minutes away.

Footage posted on YouTube showed corpses of women and children and burning tents while people scrambled to save the wounded. “It’s a massacre of refugees,” a voice off camera said.

“Let the whole world see this, they are displaced people. Look at them, they are civilians, displaced civilians. They fled the bombardment,” the man’s voice said.

A man in another video of the Abedin camp, which houses people who had escaped fighting in neighbouring Hama province, said as many as 75 people had died.

Barrel bombs are crudely made containers filled with nails, metal shrapnel and explosive which are dropped from helicopters.

The regime has pressed on with using barrel bombs in civilian areas despite a UN resolution banning their indiscriminate use in populated areas.

Nearly 10 million people have been displaced by Syria’s civil war, which started in 2011 with protests but grew into an armed revolt when security forces cracked down on the demonstrations.

An estimated 3 million refugees have fled the country and the conflict has killed close to 200,000 people, according to the UN. 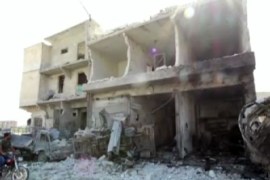 The government’s use of crude munition has destroyed large parts of the historic city and left hundreds dead. 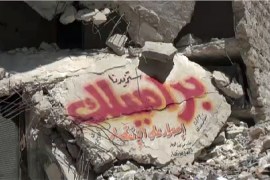 Graffiti artists in the embattled nation are hitting the streets with a new message. 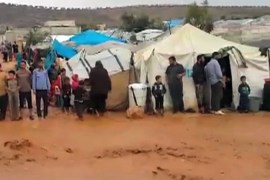 Syrian refugees at risk from floods

Syria enters its fourth winter within the conflict, as refugee camps suffer from destruction due to harsh conditions.