Mexico has ordered the arrest of the mayor of the southern city of Iguala, along with his wife and an aide, charging they masterminded last month’s attack that left six students dead and 43 missing.

Authorities have searched in vain for any trace of the teachers college students who disappeared on September 26, in a case that has sparked national and international outrage, including mass demonstrations that saw Iguala’s city hall torched on Wednesday.

“Arrest warrants have been issued for Iguala mayor [Jose Luis Abarca],” as well as his wife and public safety chief,” as the individuals who likely organised the events that took place in Iguala,” Attorney General Jesus Murillo Karam told reporters.

Authorities allege that Abarca ordered the police operation to halt the students disrupting an event hosted by his wife.

They added that Iguala’s police force shot at buses carrying the students and handed them over to officers in the neighbouring town of Cocula, who then delivered them to the Guerreros Unidos drug gang.

The protesting students were last seen being bundled into police cars after clashes with officers, and police have reportedly confessed to handing them over to the gang.

The mayor’s wife, Maria de los Angeles Pineda, is a sister of at least three known drug traffickers, and the couple has ties to Guerreros Unidos, authorities said.

A total of 36 municipal officers in Iguala have been arrested during the case, along with 17 Guerreros Unidos members and their leader.

On Wednesday, protesters in Iguala set fire to the city hall building in the latest display of rage over the unsolved disappearances.

I am indignant over what happened. They could have been my students, my brothers, my children

Carrying torches and candles, tens of thousands of people also marched through Mexico City on Wednesday to protest about the disappearance of the students.

“We shall overcome,” protesters, made up of students, teachers, farmers and activists, shouted with clenched fists in the air as they walked through the city streets.

The march was peaceful and the town hall gave the figure of participation at 45,000.

Protesters carried large black and white photos of the missing and called out their names, one by one, as if in a roll call in class, followed by the world “present.”

“I am indignant over what happened. They could have been my students, my brothers, my children,” said Jorge de la Pena, a psychology professor at the National Autonomous University of Mexico.

Abarca “gave police the order to confront” students, who were known for frequent protests, so that they would not derail a public event by his wife, the head of a local state children’s protection charity said.

Authorities last week announced the arrest of the “maximum leader” of the Guerreros Unidos gang, Sidronio Casarrubias, at a police checkpoint on a highway between Mexico City and the nearby city of Toluca.

Officials have found several mass graves in Iguala but say 28 sets of remains examined so far do not correspond to the students.

This week, the government announced a $110,000 reward for information on the disappearance of the students. 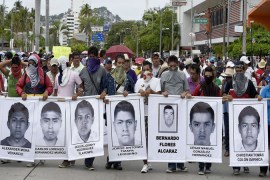 Hunt for 43 missing students and discovery of mass graves highlight just how many people have disappeared in Guerrero.