Yerevan, Armenia – Thousands of people have gathered in the Armenian capital to protest against the government, accusing it of failing to address corruption, in the largest such demonstration in years.

Over 10,000 protesters rallied in Yerevan’s Freedom Square on Friday, brought together by three of the country’s major opposition parties, following a series of smaller demonstrations over the past two weeks in cities across the country.

In between speeches by party representatives, protesters chanted “Serzh, leave,” calling on the country’s president, Serzh Sargsyan, who was re-elected in 2013, to quit.

“I’m tired of this government. It’s only working for itself, not the people,” said Ashot Petrosyan, 61, who came to show his support for the protest in front of the city’s iconic opera house.

Maria Titizian, managing editor of CivilNet, an independent online TV station, said besides the large number of protesters, what made Friday’s rally unusual was that three parties from Armenia’s normally fragmented opposition came together.

“We’ve come to a point where a majority of the population is really dissatisfied with the quality of living and the level of impunity and corruption, and they’re desperate for change,” Titizian said.

“My concern is that changing the people on the top is not going to bring fundamental change, unless there is fundamental institutional change, impunity is eradicated and there is rule of law in the country. We’ve had several cases of high-level politicians getting away with crimes, just being assigned other portfolios,” she added.

The small country in the Caucasus, that became independent in 1991 after the fall of the Soviet Union, is plagued by persistent unemployment and low wages that push thousands of people to leave every month.

“The level of emigration is a catastrophe,” said Lousineh Navasartian, 29, who stood near the front of the protesters. “And there’s corruption at every level of society.”

In addition to general discontent with the government and the president, the opposition is rallying against constitutional amendments proposed by the ruling Republican Party of Armenia (HHK) party.

The opposition says that the purpose of the reform is to allow Sargsyan to become a powerful prime minister after completing his second and final presidential term in 2018.

“If the constitution is changed, the current government will just expand its life cycle,” protester Petrosyan said.

Sargsyan’s HHK and an opposition party that has not joined the latest protests, the Armenian Revolutionary Federation (Dashnaktsutyun), argue that the proposed amendments, that will limit the sweeping presidential powers, are critical for Armenia’s democratisation. 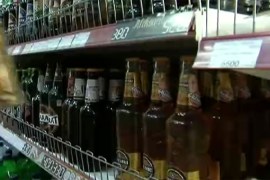 Many Armenians worry membership of the Eurasian Economic Custom Union would lead to higher prices for European imports.