Cristina, 48, has been linked to the business affairs of her husband, former Olympic handball player Inaki Urdangarin, who is under investigation for alleged embezzlement of public funds.

It is believed to be the first time a direct relative of Spain’s king will appear in court as a crime suspect.

Tuesday’s decision by a court in the island of Majorca is a major blow to the prestige of the 76-year-old king, who became head of state after the death in 1975 of General Francisco Franco and helped guide the country’s transition to democracy.

Battling scandal and ill health, Juan Carlos appeared tired as he presided over a military parade while on crutches on Monday in his first public appearance since undergoing an operation to replace his left hip on November 21.

The judge in Palma on Majorca, Jose Castro, said in a written ruling that he had decided to summon Cristina to appear in his court on March 8 as a suspect to testify “about alleged tax and money laundering crimes”.

The investigation could lead to formal charges.

The princess’s defence lawyer, Miguel Roca, said he would appeal the summons.

Castro has been investigating the corruption scandal involving Cristina’s husband since 2010. In summoning Cristina, he overruled opposition by the public prosecutor.

Manos Limpias, a litigious far-right pressure group which the appelation means Clean hands, lodged the case against Cristina alleging tax evasion and money laundering, although tax authorities have not brought any charges and public prosecutors have said there is no case to answer.

Castro has been investigating allegations that Urdangarin and a former business partner embezzled six million euros in public funds via the Noos Institute, a charitable foundation that he chaired.

The blonde-haired Cristina was a member of the board of Noos and with her husband jointly owned another company, Aizoon, which investigators suspect served as a front for laundering embezzled funds.

Castro had summoned Cristina on suspicion of corruption once before, in early 2013, but that decision was overruled following an appeal by the prosecutor.

He then opened a new line of inquiry seeking evidence that Cristina was linked to her husband’s activities, scrutinising her tax declarations and bank accounts for incriminating travel, restaurant or family party expenses.

“Saying ahead of time that Dona Cristina Federica de Borbon did not know of her husband’s activities, and the criminal significance of her own, would be as hasty as declaring inexorably the opposite,” Castro said.

In Spain, civic groups can force prosecutors and judges into action by filing criminal lawsuits known as “people’s accusations”.

Manos Limpias has spurred action on several ongoing corruption cases in Spain, by filing this sort of lawsuit. 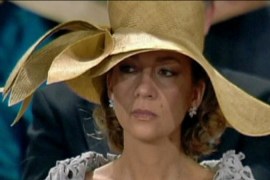 Princess Cristina set to appear in court in connection with embezzlement case against her husband.