At least 17 people have been killed as Muslim Brotherhood supporters clashed with police in Cairo and other Egyptian cities, the country’s Health Ministry has said.

The ministry told Al Jazeera that ten deaths were recorded in Cairo on Friday, three in Fayoum, two in Alexandria, and each in Ismaliya and Minya in upper Egypt.

Protesters said the real figure was much higher.

The ministry did not say whether the dead were protesters, police or bystanders.

Dozens more were reported injured, while at least 122 people have been arrested, according to medical and security officials.

The clashes come amid an ever-widening state crackdown on the Muslim Brotherhood movement.

Rallies in support of ousted President Mohamed Morsi have turned increasingly violent ahead of a key referendum this month, which would ban religiously based political parties and give more power to the military.

It would be a further step towards the complete removal of the Brotherhood from public life after the group won every election in Egypt since Hosni Mubarak was overthrown in 2011.

‘We are not afraid’

Protesters set fire to a police vehicle in Cairo using petrol bombs as police fought street battles with rock-throwing protesters in the capital.

“We are not afraid, we love Egypt and what we are doing is for Egypt,” said Mohamed Dahi, a 39-year-old protester, as he distributed leaflets calling for a boycott of the referendum.
“I am against all injustice and the military rule. I won’t accept any military rule in Egypt,” Dahi told the AFP news agency

I won't accept any military rule in Egypt.

as as he participated in a protest along with his 10-year-old son.

Demonstrators chanted “Down with military rule” and slogans against army chief Abdel Fattah el-Sisi, who removed Morsi from the presidency in July.

Cairo’s main squares were sealed off by security forces using barbed wire and military vehicles. They included Tahrir Square, as well as Rabaa al-Adawiya and Nahda squares, which were the sites of a bloody crackdown on Morsi’s supporters in August.

The clashes took place less than two weeks before a vote on a new constitution, a milestone in the road map which the army-backed authorities say will pave the way for a return to a democratic rule by next summer.

Protesters opposed to the army’s overthrow of Morsi have been holding daily demonstrations in Cairo and in other cities ever since the military government declared the Muslim Brotherhood a “terrorist” group last month, a move that upped the penalties for dissent. 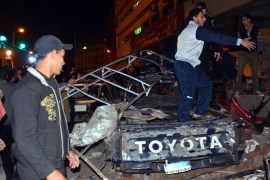 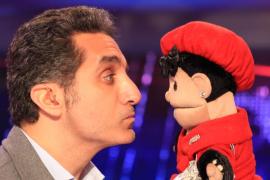 Fahita ad is said to carry coded details of a possible attack by Muslim Brotherhood. 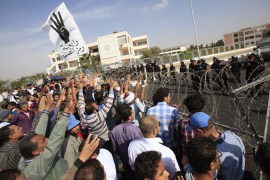 Deposed president Mohamed Morsi and 130 others will go on trial on January 28, judiciary says.