The Syrian government has been deliberately and systematically razing homes, buildings and entire rebel-held neighbourhoods to the ground with bulldozers and explosives, according to a rights group.

A new report, released by Human Rights Watch (HRW) on Thursday, accused the regime troops of entering opposition strongholds and destroying the buildings.

“Wiping entire neighbourhoods off the map is not a legitimate tactic of war,” said Ole Solvang, emergencies researcher at HRW.

“These unlawful demolitions are the latest additions to a long list of crimes committed by the Syrian government.”

The total area demolished is about 200 soccer fields, according to the group, and is seen as punishment for Syrian civilians supporting rebel forces. The demolitions were supervised by military forces and took place in the wake of violence.

The group looked at 15 commercial satellite images and listened to testimony of 16 witnesses whose houses were lost, including media reports, government statements, and more than dozens of YouTube videos.

HRW interviewed Umm Oday of the Masha al-Arbeen neighbourhood in Hama, Syria, by telephone about demolitions in her community.

Oday said she left her house a month before her home was demolished fearing the violence of war. She told HRW that she returned home as soon as she heard about the plans for demolition from a neighbour.

“I yelled, screamed and cried for them to let me pass to see what is going on with my house. When they allowed me and other women to pass, the bulldozer was already demolishing houses while their owners stood outside watching.

“I begged the soldier to let me in to collect my belongings. He let me, but I had only a few minutes. After I left, the bulldozer demolished my house. Nothing was left of it, not even the walls.”

She also reported to HRW that the Syrian army used tanks to block her from entering her street.

HRW reported two waves of demolitions in the Qaboun neighbourhood of Damascus during a one-year period, where according to satellite imagery analysed by HRW, 18 hectares were affected.

The report said: “Human Rights Watch has not been able to find any government statement or decree explaining the reason for the demolitions in Qaboun. The first wave appears to have been directly related to intensive clashes between government and opposition forces in mid-July, 2012.”

Residents told HRW that government forces gave little or no warning of the demolitions so that they could collect their things or appeal. But HRW found no injuries or deaths related to the razing.

“The demolitions either served no necessary military purpose and appeared to intentionally punish the civilian population or caused disproportionate harm to civilians,” HRW reported.

Demolitions like the ones HRW uncovered were part of an urban revitalisation programme and ridding communities of illegal buildings constructed without permits, according to reports HRW cited from the government and pro-regime media.

HRW says according to testimonies it has received, homeowners had the correct permits and documentation.

“As far as Human Rights Watch has been able to determine, there have been no similar demolitions in areas that generally support the government, although many houses in those areas were also allegedly built without the necessary permits.”

Either way, according to the new report, the demolitions have resulted in displacement and the loss of whole communities during a state of civil war. The group is calling on the authorities to stop, and for the United Nations to refer the issue to the International Criminal Court.

The seven cases Human Rights Watch documented took place between July 2012 and July 2013 in the following areas: the Masha al-Arbeen and Wadi al-Jouz neighbourhoods in Hama, and the Qaboun, Tadamoun, Barzeh, Mezzeh military airport, and Harran Al-`Awamid neighbourhoods in and near Damascus. 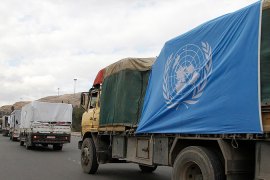 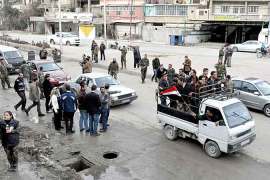 UN mediator says humanitarian aid to the city of Homs discussed on second day of talks between rival sides in Geneva. 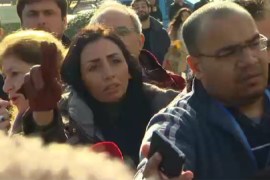