Yemen’s rival factions have wrapped up months of national dialogue aimed at drafting a new constitution and establishing a federal state amid secessionist agitation in the south of the country.

President Abd-Rabbu Mansour Hadi, who succeeded Ali Abdullah Saleh in 2012, pledged at a ceremony in Sanaa on Saturday to form commissions to draft the new constitution and thrash out the details of the promised new federation.

“All [sides] have made painful concessions,” Hadi said of the dialogue which had been due to last six months but was extended for another four in the face of bitter disagreements over key issues.

Secessionists boycotted the talks launched in March last year as part of a UN-backed transition that saw president Saleh step down after 33 years in power following Arab Spring-inspired protests in the region’s poorest country.

“This is a historic day,” Ban Ki-moon, UN secretary-general, said in a recorded video message played during the ceremony.

His envoy to Yemen, Jamal Benomar, who has been overseeing the implementation of the peace deal, hailed the outcome of the dialogue as a “clear road map”.

“The dialogue was not a picnic, and faced tough challenges,” Benomar said, adding that the Yemeni people “should be proud of this achievement”.

Southerners have strongly opposed proposals for a federation of six units – four in the north and two in the south – instead of one each for the formerly independent north and south, fearing that their influence would be diluted.

“We will work as soon as possible to form a regions committee and another to draft a constitution,” Hadi said at the ceremony attended by representatives of the UN, the Arab League and Gulf Arab states.

“We still have a long way to go to implement the document.”

Hadi is himself originally from the south of Yemen.

Benomar urged southerners to “react positively” to the outcome of the dialogue, taking into consideration the proposed “solutions to the south issue that all have signed”.

Participants in the national dialogue agreed that Hadi’s term of office should continue until a new president is elected, a process that could take years as the new constitution and electoral law are thrashed out.

Southern parts of Yemen formed an independent state from the end of British colonial rule in 1967 until union with the north in 1990.

A secession attempt four years later touched off a brief but bloody civil war that ended with northern forces taking over the south.

In a separate development on Saturday, an Iranian embassy official kidnapped in Sanaa in July was found beheaded in central Yemen on Saturday, according to a provincial official.

The official, who asked not be named, said local people found the body of the diplomat in an area of oil fields in Maarib province.

Noor Ahmad Nikbakht had been kidnapped by armed men while he was travelling through the diplomatic quarter of Sanaa in July.

Local residents had apparently been in contact with the kidnappers, who had been moving him around the area in recent weeks, the official said.

He said the condition of the body suggested the diplomat had been killed at least a day earlier.

The body was taken for forensic examination in Sanaa.

However, Iran’s Student News Agency (ISNA) quoted an Iranian embassy official as denying that the headless body belonged to Nikbakht.

“Yemen officials have announced they are still following up on release as soon as possible of Noor Ahmad Nikbakht and according to [their] latest information he is in good health,” ISNA said.

Maarib was also the scene of a US drone on a vehicle on Thursday night that, according to a Yemeni military source, killed three al-Qaeda suspects.

“A vehicle was hit by a missile fired from an American drone. It was totally destroyed and the three people inside, al-Qaeda militants, were killed,” the source told AFP news agency.

The attack took place near a military position in the Obeida valley, east of the city of Maarib and away from residential areas, the source said.

The US military operates unmanned aircraft flying over Yemen in support of the government’s campaign against al-Qaeda that has killed dozens of fighters. 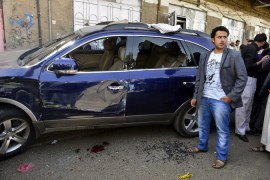 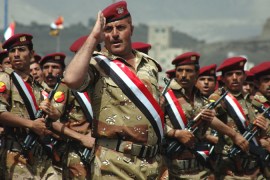 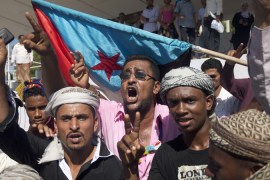 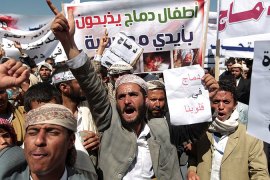