Cairo – At least 29 people have been killed across Egypt amid nationwide protests on the third anniversary of the 2011 revolution, with unofficial reports of a death toll nearly twice as high.

The worst violence was directed at supporters of deposed President Mohamed Morsi, who staged dozens of rallies across the country.

Witnesses reported deadly clashes in Minya, Giza, Alexandria and several other governorates, and the Health Ministry said that 29 people were dead and more than 170 wounded by 8:30pm local time (1830 GMT) on Saturday.

There were reports of numerous deaths in Alf Maskan, a neighbourhood in eastern Cairo, though the exact number could not be confirmed.

Two witnesses in the area took photos that seemed to show at least nine dead bodies wrapped in shrouds.

The Muslim Brotherhood said in a statement that more than 50 people have been killed nationwide, though casualty figures released by the group have often been exaggerated in the past.

Armed groups also staged three attacks on security forces, the most spectacular of which reportedly brought down a military helicopter in north Sinai.

Two explosions rocked Cairo early on Saturday and a third followed in Suez, targeting a police base.

Activists opposed to both the army and the Brotherhood also tried to lay claim to the streets, with a rally in Cairo’s Mohandiseen district around noon.

They were chased off, only to regroup several hours later downtown, blocks away from Tahrir, where security forces fired tear gas and live ammunition.

The April 6 youth movement said one of its members was killed by gunfire, and by mid-afternoon the violence had prompted several revolutionary groups to urge supporters to go home.

But the main pro-military event in Cairo’s Tahrir Square was peaceful, protected by a heavy deployment of soldiers and police.

The crowds gathered in the square made little mention of the 2011 uprising that toppled President Hosni Mubarak.

Instead they came to celebrate General Abdel Fattah el-Sisi, the military chief who deposed Morsi in July.

Crowds arrived throughout the afternoon, many of them chanting “the people demand the execution of the Brotherhood.”

Others called for the “Affirmation of the regime”, a play on the revolutionary slogan calling for its downfall.

“We want to show that we won’t go back to the Brotherhood, and we won’t be scared by their terrorism,” said Mohamed Salama, entering Tahrir Square with a group of about 20 people.

“This is about correcting the path of the revolution.”

For many, the next step on that path should be electing Sisi to the presidency.

“Look around, he has our support. If he does not run, who will?” asked Amer Ali Said, an engineer.

Analysts say it is still unclear whether Sisi will run, though Saturday’s rallies certainly seem to push him in that direction.

Thousands of Sisi’s supporters also gathered in other sites across Cairo and in governorates outside.

“We aren’t scared. All the people of Port Said, of Egypt, we are down in the streets today,” one man from Port Said told a state television reporter.

Local media reported that an army helicopter was shot down near the town of Sheikh Zuweid in North Sinai, possibly by a missile.

A military spokesman confirmed the helicopter crash, but would not comment on the cause.

The Interior Ministry confirmed a bombing outside a security barracks in Suez, which injured at least nine people. And a small explosion at a police building in eastern Cairo around 8am injured one person.

There were no claims of responsibility for Saturday’s attacks, which followed a series of four bombings across the capital on Friday.

The deadliest, a car bomb, tore through the security directorate, killing four people and injuring more than 70.

Prosecutors said on Saturday that the vehicle used in the bombing had been stolen from the Electricity Ministry. 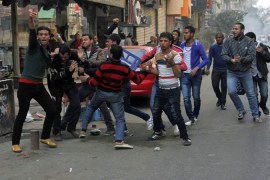 Eric Trager, Egypt specialist at the Washington Institute for Near East Policy, talks to Al Jazeera. 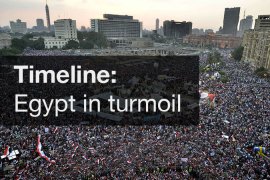 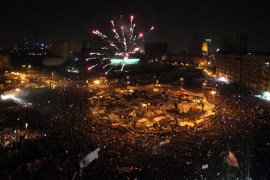 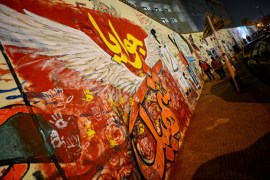 Egypt’s tumult told by the art it inspired

Inspired by three years of struggle for new freedoms and better lives, Egyptian artists have been prolific.