South Sudan’s government and rebels have signed a ceasefire deal that many hope will put a pause to five weeks of fighting that has killed thousands of soldiers and civilians in the world’s newest country.

The peace deal, signed in the Ethiopian capital Addis Ababa on Thursday by representatives of President Salva Kiir and Riek Machar, the rebel leader and and former South Sudanese vice president, is the first real progress since political friction turned violent on December 15.

Mediators from the East African regional bloc IGAD, which has been brokering the peace talks, said the deal will put in place a verification and monitoring mechanism for the truce and allow unrestricted access to aid workers.

Reports said Kiir’s government also agreed to free 11 officials close to Machar who were detained in course of the fighting, although no timeline for their release was given.

The status of the detainees had been a major sticking point in the peace talks.

“These two agreements are the ingredients to create an environment for achieving a total peace in my country,” Taban Deng Gai, the head of Machar’s delegation, said.

Deng Gai, a general in South Sudan’s army before he defected to the rebel side, said he hoped the deal would “pave the way for a serious national political dialogue aiming at reaching a lasting peace in South Sudan”.

An estimated half million residents have fled their homes because of the fighting, which has often pitted Kiir’s Dinka-led government and military against ethnic Nuer fighters backing Machar.

The UN has warned of atrocities committed by both sides on the battlefield.

The fighting has endangered South Sudan’s oil industry, after technical workers fled and rebel fighters took control of the fields for some time.

Nhial Deng Nhial, negotiator for Kiir’s government, said the Addis Ababa talks, which had been dragging on for three weeks, were “not easy”.

“We hope to be able to make haste towards an agreement that will end bloodshed,” he said, but voiced scepticism over the ability of the rebels, comprised of renegade army units, ethnic militia and ordinary civilians, to halt their operations.

“What worries us is whether the agreement on the cessation of hostilities will stick [and] the capacity of the rebel group … to stop fighting.

“We would like to take this opportunity to urge the rebel group to heed the voice of reason and abandon the quest for political power through violence.”

“Riek Machar has been using that force to fight the SPLA, so we have to see what will happen,” Aguer said, using the acronym for South Sudan’s military.

“War is not good for anybody, especially war fought for power of a political position.

“Civilians, innocents are dying, so it is good for the people of South Sudan to have peace.”

The UN said on Thursday it is protecting 76,000 civilians at eight bases in South Sudan.

The UN mission has received reports of fighting continuing in multiple locations in the country.

Nevertheless, Jay Carney, the White House spokesman, welcomed the signing of the ceasefire deal, describing it as a “first critical step in ending the violence” and building a sustainable peace.

The US expects both parties to implement the agreement fully and swiftly and move towards an inclusive dialogue, he said.

“The United States will remain a steady partner to those who choose the path of peace” and work towards a more democratic, unified South Sudan, Carney said.

The US helped broker talks that saw South Sudan end its civil war with Sudan in 2005 and then gain independence in 2011.

The European Union also welcomed the ceasefire deal in a statement on Thursday.

“I welcome the agreement on the cessation of hostilities in South Sudan. This agreement must now be turned to reality and the parties must move immediately to implement in good faith.

“This means that the killing must end now. Women must be safe again. Children must be protected. The displaced must be able to return home. Humanitarian assistance must reach all in need without obstacle or abuse.” 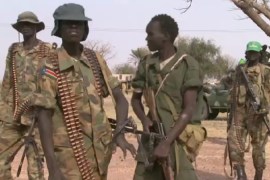 It is critical the mediation process be restructured if current peace talks can deliver a lasting political solution. 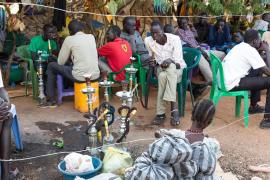 In Pictures: Juba looks ahead 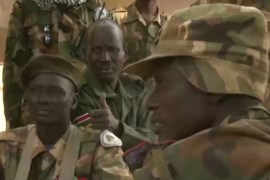