The colonel in charge of military operations against fighters in eastern Democratic Republic of Congo (DRC) has been killed in an ambush along with three other soldiers, according to a government spokesman.

Lambert Mende, the spokesman, said on Thursday that Colonel Mamadou Ndala, who helped to secure the military defeat of the M23 rebel group in November, died of his injuries after a rocket attack on his vehicle near the village of Mazizi in North Kivu province.

“Colonel Mamadou Ndala has been killed.

“Apparently it was the ADF-Nalu [Ugandan rebel force] that killed him and two of his bodyguards,” Mende told news agency AFP.

“This is really an immense loss for the armed forces and the republic.”

ADF-NALU has been blamed for attacks and kidnappings around the town of Beni in North Kivu, including the deaths of at least 60 civilians in two attacks last month.

The DRC government, together with 21,000 peacekeeping troops from the UN, are attempting to subdue armed groups that are operating in the east of the country. 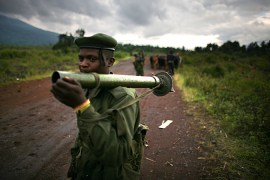 The Congolese army defeated the M23 fighters but their next target, Ugandan group ADF-NALU is a different challenge. 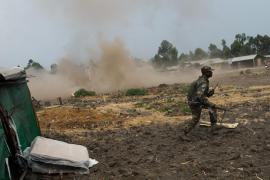