Yingluck Shinawatra’s announcement on Wednesday came after the overnight wounding of two people in a shooting attack on anti-government protesters in Bangkok, and an apparent bomb attack on an opposition leader’s home.

Yingluck had offered to meet rivals on Wednesday to discuss an Election Commission proposal to delay the February 2 ballot. But protest leader Suthep Thaugsuban and the opposition Democrat Party refused to take part, saying reform to get rid of corruption in politics must happen first.

Yingluck said there was no legal way for the Election Commission to delay it.

Gunshots, which rang out in the heart of Thailand’s capital overnight has hit a man in the ankle, and a woman in the arm, according to the city’s emergency services office.

The shooting took place on a street in central Bangkok that has been occupied by camping demonstrators trying to bring down Yingluck’s government since Monday.

It was the latest in a string of violent incidents this month that have kept the city on edge and fuelled fears the nation’s deadlock could spiral out of control.

In another incident overnight, a small explosive device was hurled into a residential compound owned by former Prime Minister Abhisit Vejjajiva, shattering windows and slightly damaging a roof, according to Police Colonel Chumpol Phumphuang and Abhisit’s opposition Democrat Party.

No injuries were reported, and Abhisit – who resigned from Parliament last month to join protesters – was not home at the time.

Despite the incidents, Bangkok was calm on Wednesday and most of the city has been unaffected by peaceful demonstrations.

Protesters accuse Yingluck’s government of corruption and misrule, and for being the puppet of her older brother and former prime minister, Thaksin Shinawatra. 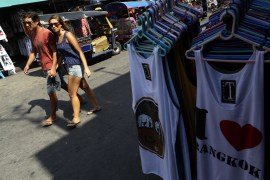 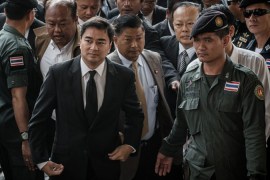 Observers say political division is intensified with the rich and powerful immune to the rule of law. 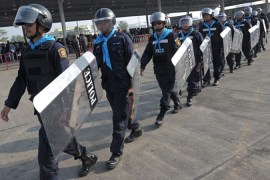 Street protests form a familiar sight to residents of country plagued by political unrest for years.