Thousands of Thai anti-government demonstrators continued their protests across Bangkok after the first night occupying several major intersections of the city as part of their planned shutdown in the capital.

The mood at the Pathumwan intersection early on Tuesday was still festive, with protesters listening to speakers and blowing whistles.

One protester said Prime Minister Yingluck Shinawatra’s resignation was the only solution now.

“Resignation is the only way out. This is the solution for the masses. We have to listen to the majority of the people,” he said.

On Monday tens of thousands of anti-government protesters occupied parts of central Bangkok, ratcheting up a two-month agitation to force the resignation of Yingluck and meeting no resistance.

Police and soldiers maintained a low profile as the “Shutdown Bangkok” drive got underway in the city of about 12 million people. The mood was festive, with many protesters singing and dancing in the streets.

Major intersections that normally teem with cars and trucks were blockaded, but trains and river ferries were operating, most shops were open and motorbikes plied the roads freely.

In an attempt to end the unrest, Yingluck called a snap election for February 2, but protest leader Suthep Thaugsuban has rejected the poll, which the prime minister’s Puea Thai Party would probably win.

As the blockade began to bite, Yingluck invited the protest leaders and political parties to a meeting on Wednesday to discuss an Election Commission proposal to postpone the vote, according to a senior aide of the prime minister.

Some anti-government protesters started to move from their rally points to various government buildings in Bangkok early on Tuesday morning.

Pro-Thaksin groups started rallies in several provincial regions on Sunday (January 12) but are steering clear of Bangkok for now.

Suthep has said he would call off the protests if, as some fear, civil war threatened to break out.

The government deployed 10,000 police to maintain law and order, along with 8,000 soldiers at government offices. 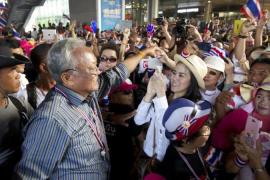 Suthep Thaugsuban, whose supporters are trying to topple the government, says there will be no negotiations. 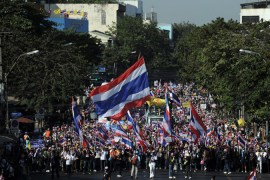 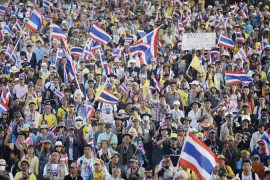