Syrian regime troops have started moving towards rebel positions on the outskirts of Aleppo city, including the strategic district of Sheikh Najjar.

The territory is the main point of entrance into the rebel-controlled east, and by taking it, the government could effectively block supply lines from Turkey, Al Jazeera’s Zeina Khodr said on Sunday.

“The rebels are bogged down in their own war in the opposition-held north and the regime is trying to push forward, trying to make advances,” our correspondent said from Beirut.

Activists said the Syrian regime was also attempting to push towards a strategic highway linking the airport to the western part of city, which remains under government control.

The government’s push comes amid fierce infighting between various armed opposition groups, primarily directed against al-Qaeda-linked fighters in the Islamic State of Iraq and the Levant (ISIL).

At least 700 people have been killed in the past nine days as rebel forces turned on each other, while dozens of fighters from both sides were kidnapped, the Britain-based Syrian Observatory for Human Rights said.

On Saturday, ISIL fighters fought pitched battles with other rebels in the northwestern town of Saraqeb and seized the frontier town of Tal Abyad on the border with Turkey after Islamist rebels pulled out, the Observatory said.

Meanwhile, US Secretary of State John Kerry arrived in Paris along with other foreign ministers to hold talks on the Syrian war, hoping to press the fractured opposition to participate in an upcoming peace conference.

The Sunday meeting of the “Friends of Syria” group at the French Foreign Affairs Ministry was to include ministers from 11 countries that support the so-called Geneva 2 peace process, along with Ahmed Jarba, the president of Syria’s main opposition National Coalition.

The 11 countries – the United States, Britain, France, Germany, Italy, Turkey, Saudi Arabia, the United Arab Emirates, Qatar, Egypt and Jordan – planned to increase pressure on Jarba to persuade the opposition to join the UN-led talks, set to open in the Swiss town of Montreux on January 22.

The talks would be the first time since the war erupted in March 2011 that the Syrian regime of President Bashar al-Assad sits down with the opposition to discuss an end to hostilities.

But while the regime has said it will attend, the fractious, exiled opposition postponed a vote on whether to participate until January 17.

More than 130,000 people have been killed in Syria and millions more displaced since the conflict erupted in March 2011. 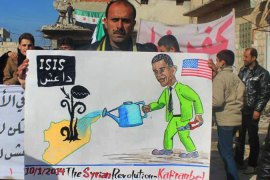 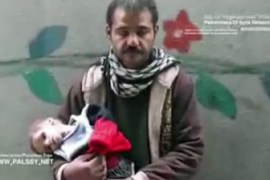 People in Damascus district are reportedly eating animal feed and women are dying in labour due to malnutrition. 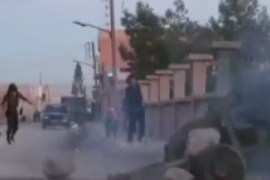 Setback for al-Qaeda-linked group in Syria

ISIL loses another base to armed opposition, which says Syrians can no longer tolerate abuses by foreign fighters.