Gunfire has been reported on the streets of Bangui in the Central African Republic’s capital after the news that interim President Michel Djotodia, facing international pressure, had agreed to resign after failing to halt inter-religious violence.

The resignations of Djotodia and Nicolas Tiangaye, the prime minister, were announced on Friday in a statement issued at a two-day summit of the Economic Community of Central African States (CEEAC) in neighbouring Chad.

Talks to decide on new leadership will take place in CAR, it said.

Under an agreement brokered by the CEEAC last year, CAR’s transitional assembly (CNT) elected Djotodia to his position as interim president in April to take the former French colony to elections, due at the end of this year.

As news from the summit reached Bangui, thousands of residents took to the streets, dancing, singing and honking horns in celebration.

Cheers erupted at a camp for 100,000 displaced Christian civilians at the city’s French-controlled airport.

There were no signs of the pro-Djotodia fighters who once dominated Bangui, Reuters news agency reported.

Al Jazeera’s Barnaby Phillips, reporting from Bangui on Friday, said the gunfire broke out shortly after the resignation announcement.

“It is not possible to work out who is firing at who at this stage,” he said.

“The international community is going to have to react very quickly as there is no one regionally who can unite CAR.

“The foreign troops are largely welcome but they are not necessarily enough. The trouble in recent weeks and month has not just been in Bangui.”

Despite the celebrations on Friday, there are fears that the resulting power vacuum will lead to greater instability if it is not filled quickly.

Jean-Yves Le Drian, the French defence minister, said he wished for the new leadership to be announced “as soon as possible”, adding that “the aim is to move forward with elections before the end of the year”.

“We need the National Transitional Council to find a provisional alternative,” he said.

Thousands of people have been killed and one million displaced by cycles of violence since abuses by Djotodia’s mainly Muslim rebels, known as Seleka, prompted the creation of Christian self-defence armed groups after he seized power in March.

Djotodia’s resignation was announced after members of the CNT were summoned to the Chad summit late on Thursday to take a decision on the country’s future.

“We take note of the resignation. It is up to the CNT to decide what happens now,” Romain Nadal, a French Foreign Ministry spokesman, said.

“France does not interfere in any case with this process.”

With memories of Rwanda’s 1994 genocide stirred by the unrest, France sent hundreds of troops to CAR last month to support African peacekeepers trying to keep the peace.

But the killings have continued, and France has repeatedly voiced its frustration with Djotodia’s government.

France has 1,600 troops in the country, operating under a UN mandate to assist an African force that is due to be bolstered to 6,000 men.

It strengthened its military presence on the streets on Friday. 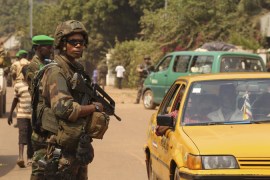 Diplomats to consider deploying up to 1,000 troops to reinforce French contingent as humanitarian concerns mount. 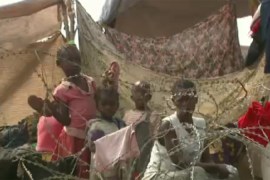 Doctors vaccinating children in refugee camp near Bangui airport where 100,000 people have taken shelter from violence. 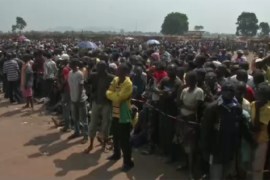 CAR’s political fate in the balance

Displaced people throng camp in Bangui in search of food as ethnic conflict leaves country on brink of catastrophe.