President Vladimir Putin has pledged to annihilate “terrorists” following two deadly bomb attacks in less than 24 hours in the southern Russian city of Volgograd that raised security fears in the run-up to the Winter Olympics.

The uncompromising remarks in a New Year’s Eve address were Putin’s first public comments since suicide bombers killed at least 34 people in attacks on a railway station and a trolley-bus on Sunday and Monday.

The bombings raised fears of further attacks before Russia hosts the Winter Olympics in less than six weeks in the Black Sea resort of Sochi, a major prestige project for Putin.

“I am certain that we will fiercely and consistently continue the fight against terrorists until their complete annihilation”, Putin said, according to Russian news agencies.

“Dear friends, we bow our heads before the victims of cruel terrorist acts,” Putin said on a visit to the east coast city of Khabarovsk.

Putin, who first became president when his predecessor Boris Yeltsin stepped down and named him to the post exactly 14 years ago on Tuesday, has been unable to defeat fighters in the Muslim provinces of the North Caucasus.

Police on Tuesday detained dozens of people in sweeps through Volgograd, although there was no indication that any of them were connected to the attacks, for which nobody has claimed responsibility.

Mourners laid flowers at the site of the bombing that tore the bus apart and left residents fearing further violence.

Due to a “technical glitch”, the New Year’s address that was broadcast earlier to the inhabitants of Russia’s furthest-flung time zones of Magadan and Kamchatka did not mention the Volgograd attacks.

Dmitry Peskov, a Kremlin spokesman, confirmed that Putin had broken with a long-standing tradition by departing from the traditional New Year’s address which is normally recorded days in advance at the Kremlin. 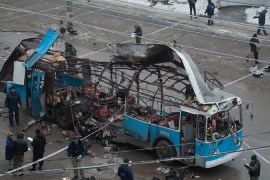 Trolley-bus bombing leaves 17 dead, as security concerns increase ahead of the 2014 Winter Olympics in Sochi. 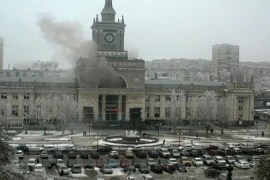 Russia’s aim to deliver “the safest games ever” is called into question after two bombings and rousing nationalism. 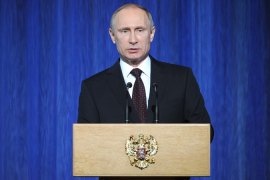 Are the recent amnesties an attempt to boost the Russian president’s image ahead of the Winter Olympics in Sochi?