Floodwaters have started receding in India-administered Kashmir, giving rescue teams a chance to reach more than 600,000 people stranded by the heaviest flooding in half a century.

Torrential rains and landslides caused by days of rain have killed at least 450 people in Kashmir – a Himalayan region divided between India and Pakistan – and adjoining parts of northern and eastern Pakistan and cut off more than one million people from basic services.

“Finally the floodwater levels are receding. Now our teams will be able to enter some of the villages that are totally submerged. Our boats are ready,” RK Khan, a police official in India-administered Kashmir’s summer capital, Srinagar, told Reuters news agency on Wednesday.

The swollen Jhelum river flooded large parts of the city of nearly one million people, snapping communication lines as desperate families were forced to huddle on rooftops of houses and mosques for survival.

The death toll from the flooding in India-administered Kashmir reached 220 by Wednesday.

Locals told Al Jazeera that they were facing shortage of basic amenities and they run the risk of starving in their homes and localities.

“Locals are distributing rice and water to the victims. The water is still in our ground floors. The rescue effort is slow in many localities because there aren’t many boats to reach people trapped in attics and top floors,” Yasir Kachroo told Al Jazeera from Srinagar’s Aluchi Bagh neighbourhood.

“There is no electricity or medicine here. We have exhausted the food we had saved for the last many days.”

“I know people have lost everything. We promise to rehabilitate them. No relief and rehab camps can be perfect. We are doing all we can,” he said.

Even as the emergency workers struggled in Srinagar to rescue hundreds of thousands of people, anger is growing over the speed of the rescue effort.

“We are sending medicines, chlorine tablets, and baby food. But we are facing severe difficulties of transport. The government has made permission for transport very difficult,” Arif Ayaz Parrey told Al Jazeera from New Delhi where 50 team members have been involved in relief efforts since floodwaters engulfed Srinagar and southern Kashmir.

Parrey praised “the heroic rescue being work done in Kashmir by local men and women” and accused the administration of “utter failure”.

Pakistan and India have offered help to each other, but so far they are not collaborating in the relief effort. The Asian countries have not accepted the UN’s offer to help in the rescue and relief efforts.

On Wednesday, the Indian army said it had evacuated more than 57,000 people from their homes, mosques and government buildings.

The flooding is the first major humanitarian emergency under Indian Prime Minister Narendra Modi, and also comes at a difficult time for Pakistani Prime Minister Nawaz Sharif, who has faced weeks of street protests aimed at forcing him out.

In Pakistan and Pakistan-administered Kashmir, at least 241 people were reported to have been killed by the floods across the country, including 10 worshippers killed on Tuesday when the roof of a mosque collapsed on them in the eastern city of Lahore.

Pakistan broadcaster Samaa TV aired footage on Wednesday of floodwater spreading through the Jhang district in the Pakistani state of Punjab.

Local villagers were seen wading through floodwater and evacuating their homes close to the Chenab river.

Authorities are warning about 700,000 more to be prepared to flee their homes as helicopters and boats raced to save marooned victims.

Pakistan army has said since the start of the relief operation, its troops rescued more than 18,000 stranded people to safer places using over 500 boats and five helicopters.

The floods, which began on September 3, are the worst since a similar natural disaster killed 1,700 people in 2010. 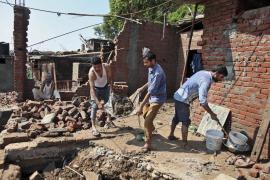 In Pictures: Kashmir and Pakistan floods