Supporters of a Pakistani anti-government cleric have clashed with police in the country’s second largest city resulting in at least four deaths, 500 arrests and six police officers missing, officials said.

Violence began on Friday and continued on Saturday as supporters of populist leader Tahir ul-Qadri, attempted to march on his headquarters in the city of Lahore, in Punjab province.

Following the flare-up, Qadri called off a large protest rally planned for Sunday, and instead urged his supporters to hold smaller protests in their home towns.

In a televised address, he called on his supporters to “protest peacefully,” but slammed the government for orchestrating a “massacre in the name of a crackdown.”

Qadri has accused the government of being corrupt and complict in protester deaths.

The violence, started on Friday when police fired tear gas and baton charged a protest crowd after a shipping container used to block a road leading to Qadri’s house in Lahore was removed.

The supporters brought a crane to remove the shipping container and allegedly threw stones at police who tried to stop them.

About 500 of Qadri’s supporters had been arrested and more than 100 police officers injured, according to provincial police spokeswoman Nabeela Ghazanfar.

Qadri has been rallying support against the intimidation of more than 500 of his followers from the Pakistan Awami Tehreek (PAT) movement.

On Thursday, he threatened to march on Islamabad and overthrow the government of Prime Minister Nawaz Sharif should the arrests of his followers continue.

In a statement released by PAT, Qadri was quoted as saying the group would have “no choice other than giving a final call of revolution to the entire nation to come out on streets and march towards Islamabad and provincial capitals to topple [the] government.”

Qadri, who is normally Canada-based, returned to Pakistan in June to lead what he terms a “peaceful revolution”.

A religious moderate, Qadri commands tens of thousands of followers and held a disruptive four-day sit-in protest against the government in 2013, months before the election that saw Sharif come to power for the third time.

A separate protest, led by opposition politician Imran Khan, is planned for the capital on Thursday to protest alleged election irregularities.

The planned demonstrations have unnerved Pakistan’s political scene which has been blighted by coups and street protests. 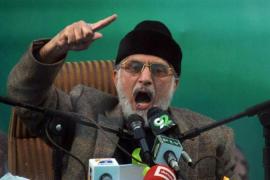 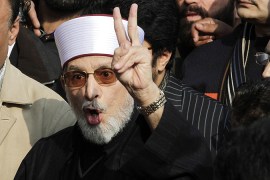 Thousands of supporters of Tahirul Qadri descend on capital amid tight security to demand reforms and end to corruption. 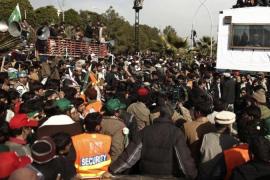 Tahir-ul-Qadri led a massive march to Islamabad, but his motives and means remain suspect to many.