Hawaiians are bracing for two hurricanes, with advancing Iselle packing high winds and heavy surf and Julio gathering steam behind it.

Hurricane Iselle was forecast to make landfall on Hawaii’s Big Island on Thursday night before passing south of the archipelago’s smaller islands on Friday, US officials said.

Wind shook palm trees on Big Island and caused white caps to form off the coast as Iselle approached rated a Category 1 hurricane, even with the eye of the storm still about 150km east of the town of Hilo on Thursday afternoon.

Hurricane Julio was gaining momentum further east, and was expected to pass near Hawaii by late Saturday or early Sunday, said Ray Tanabe, acting director of the National Weather Service in the Pacific region.

State officials warned of the potential for flash floods, mudslides and power outages, and Governor Neil Abercrombie signed an emergency proclamation, freeing up funds and other resources, in anticipation of the storms’ arrival.

Hawaii residents were stocking up on basics as authorities in Honolulu advised them to prepare seven-day disaster supply kits.

Shoppers waited in lines at supermarkets with carts full of bottled water, batteries and nonperishable food.

As they prepared, Hawaiians also had to contend with a magnitude 4.5 earthquake that struck the Big Island 19km west of Waimea on Thursday morning, according to the US Geological Survey. 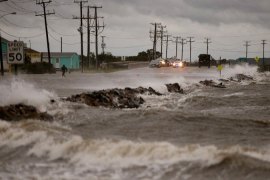 In Pictures: Damage from Hurricane Arthur

The first Atlantic storm of the season barrels up the US Eastern Seaboard into the Canadian Maritimes. 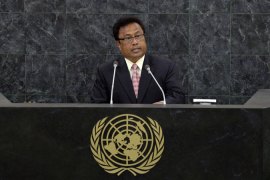 COFA Agreements provide US regional control in exchange for limited access to America.