Grand Ayatollah Ali al-Sistani, Iraq’s top cleric, has called on political leaders to refrain from clinging to their posts, in an apparent reference to Prime Minister Nouri al-Maliki, who has defied demands that he step aside.

Speaking through an aide who delivered a sermon after Friday prayers in the holy city of Kerbala, Sistani said leaders should show flexibility so that political deadlocks can be broken and Iraq can confront dangers and terrorism.

Last month, Sunni fighters from the Islamic State staged a stunning sweep through northern and western Iraq, posing the biggest challenge to Maliki’s Shia-led government since the departure of US forces in 2011.

Critics say Maliki is a divisive figure whose alienation of Sunnis has fuelled sectarian anger and played into the hands of the Islamic State, who have threatened to march on Baghdad, the capital.

Speaking through his aide, Sheikh Abdul Mehdi al-Kerbala’i, Sistani said it was time for politicians to think of Iraq’s interests, not their own.

“The sensitivity of this phase necessitates that all the parties concerned should have a spirit of national responsibility that requires the practice of the principle of sacrifice and self-denial and not to cling to positions and posts.”

Maliki, a Shia who has been in power in a caretaker capacity since an election in April, has dismissed demands from Sunnis and Kurds that he step aside for a less polarising figure.

Even some Shias oppose his bid for a third term, the Reuters news agency reported.

Politicians have been in deadlock over forming a new government since the election. The next step, choosing a prime minister, may prove far more difficult as Maliki digs in.

The 83-year-old has sway over millions of Iraqis and is seen as a voice of reason in a country deeply divided along sectarian lines.

A recluse who favours a behind-the-scenes role, Sistani has called for Iraqis to take up arms against the Islamic State.

On Thursday, the cleric met with UN Secretary-General Ban Ki-moon, who urged Iraqi politicians to form an inclusive government that can confront the Sunni fighters 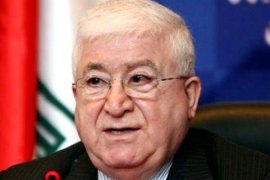 Fuad Massoum elected in a step towards new government, but appointment comes as bombings and attacks continue unabated.