Ex-general Prabowo Subianto has refused to accept a victory claim from his rival, Jakarta Governor Joko “Jokowi” Widodo, after a closely-fought presidential race in Indonesia.

Mohammed Mahfud, head of Prabowo’s campaign, said the campaign had won in many regions, saying: “We ask our people to watch the counting in the voting booth.”

“We have at least four survey institutions that clearly state we win,” Mahfud said, adding he regretted that Jokowi’s team had decided to claim victory.

After a ‘quick count’ of about 90 percent of votes on Wednesday, Jokowi was ahead by about 5 percent, which had prompted him to declare victory.

“We are thankful that according to the quick count announcements, until now, they show that Jokowi-JK at this moment in the count have won,” Jokowi told reporters and jubilant supporters in south Jakarta.

JK refers to his running mate Jufuf Kalla, who was a vice president in the first term of outgoing President Susilo Bambang Yudhoyono.

Dodi Ambardi, executive director of pollster, the Indonesian Survey Institute (LSI), told Al Jazeera that it declared Jokowi has won the election and that its quick count was outside the margin of error.
He said four groups showed a Prabowo victory. But said that those groups, “don’t have a record that’s strong”, and that those pollsters were small in number, and that their results “show irregularity”.

The official result will be announced in two weeks.

Hadi Nurul, who was manning a polling station in central Jakarta’s Pasar Manggis neighbourhood, told Al Jazeera that voter enthusiasm and turnout in his district were higher than in the 2009 presidential race.

Jokowi and his wife, who just returned from a pilgrimage to Mecca, had earlier voted in a park swarmed by supporters and media in Jakarta’s leafy Menteng neighbourhood.

Unusually, Jokowi was not wearing one of his many red-and-blue plaid shirts, his trademark on the campaign trail, but donned a traditional batik shirt instead.

“This is a good day for the Indonesian nation and the Indonesian people. I’m very confident,” local media quoted Jokowi as saying when he and his wife cast their votes.

Prabowo, wearing a white safari shirt and the national black “peci” hat and looking equally confident, said: “We respect the democratic process and, of course, we should conduct a good and correct process and show respect.”

With the race too close too call, there have been concerns of violence after results are announced, a worry alluded to by outgoing President Susilo Bambang Yudhoyono when he urged both sides to accept the result. 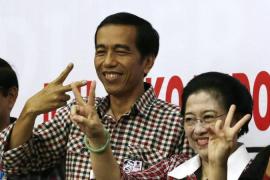 The quiet charisma of Joko Widodo

The Jakarta governor hopes to win Indonesia presidency by portraying himself as a fresh-faced man of the people. 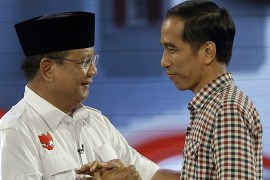 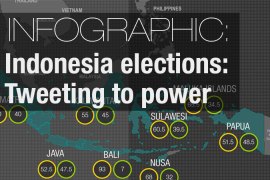 How do Indonesia’s presidential candidates stack up on social media? 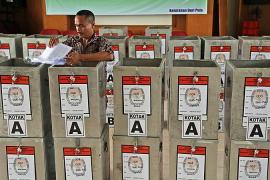 Voting is underway in a presidential election tipped to be the tightest contest in the country’s history.