Rebel fighters have shot down a Ukrainian military helicopter carrying technicians who had been installing equipment to monitor a peace plan in Ukraine’s east, killing all nine people on board.

The incident took place just hours after pro-Russian separatists on Monday night announced a ceasefire until June 27 to match a week-long truce by government forces which has been ordered by Ukraine’s president, Petro Poroshenko.

The technicians had been returning from setting up specialised equipment on Tuesday when their Mi-8 helicopter was struck by a rebel missile near Slovyansk in eastern Ukraine, said Vladyslav Seleznyov, a government forces spokesman.

“There were nine people on board. According to preliminary information … all those on board were killed,” Seleznyov said. “The fighters, having fired the rocket, hid in the nearby village of Bylbasovka.”

Dmytro Tymchuk, a military analyst with sources in the armed forces, said the helicopter had been brought down by a missile fired from a shoulder-held launcher.

Al Jazeera’s Paul Brennan, reporting from Donetsk, said while the ceasefire remained in name, but it was not being properly observed on the ground.

“If there’s nobody independent who can actually monitor the ceasefire that’s taking place … it’s very difficult to have a ceasefire that actually means anything,” he said.

Elsewhere, a rebel spokesman in Donetsk said a gun battle broke out near the city’s airport, which is under Ukrainian control.

Rebels opened fire on two Ukrainian armoured personnel carriers leaving the airport, according to a witness.

Earlier Poroshenko had said the separatists had violated their ceasefire with overnight attacks on military posts and checkpoints which killed one soldier and wounded seven others.

His plan offers a safety “corridor” back to Russia for pro-Russian fighters who lay down their arms. It has secured the backing of Western governments and qualified support from the Russian president, Vladimir Putin.

But in Slovyansk, separatists appeared to be dissociating themselves from the ceasefire agreement.

“We should not trust a single letter,” said Igor Strelkov, the rebel commander in Slovyansk, as quoted on the Facebook page of Pavel Gubarev, the self-styled governor of the “Donetsk People’s Republic”.

“They [Ukrainian troops] are trying to quickly and calmly take and reinforce new positions under the cover of the ceasefire treaty.”

Earlier on Tuesday, Putin asked Russia’s upper house to revoke the right it had granted him to order a military intervention in Ukraine in defence of Russian-speakers there. 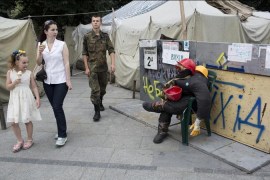 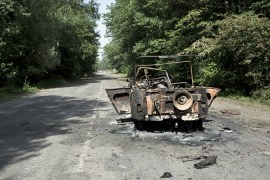 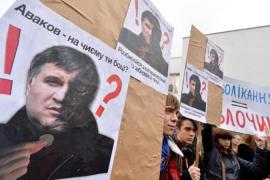