Japan has lodged a diplomatic protest with Beijing after Chinese military jets flew as close as 30 metres to Japanese military aircraft over the East China Sea, an official said.

He said the Chinese planes posed a danger to the Japanese aircraft and a serious incident could have occurred.

Onodera said the Japanese planes were on a regular surveillance mission in international airspace and that Japan would continue to defend its territory.

The two countries have increased patrols by ships and military planes to press their conflicting territorial claims in the East China Sea. They had a similar incident on May 24.

Tensions between the rivals have worsened in recent years over a group of uninhabited islands in the East China Sea called Senkaku in Japanese and Diaoyu in Chinese. Japan controls the islands but China also claims them.

Japanese fighter jets were scrambled in response to foreign aircraft 810 times last year, more than half of them Chinese, according to a recent Defence Ministry report. 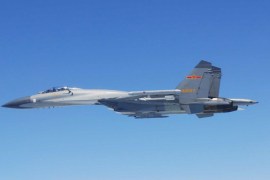 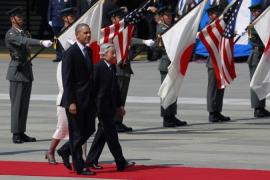 US president says islands at centre of Sino-Japanese dispute are Japanese and fall under terms of US-Japan defence pact.