At least five Vietnamese people and 16 others described as Chinese have been killed in the latest incident of rioting, Reuters news agency has reported, as tension between Beijing and Vietnam escalates over the disputed territory in the South China Sea.

Wednesday night’s violence comes hours after mobs burned and looted a number of foreign-owned factories at industrial parks near the capital Hanoi. The protests by workers are against China’s recent placement of an oil rig in the disputed Southeast Asian waters.

Vietnam has sent ships to confront the rig which are engaged in a tense standoff with Chinese vessels protecting it.

At least 20,000 workers began rioting in Binh Duong province on Tuesday. Smaller groups of men attacked factories they believed were Chinese-run, but many were Taiwanese or South Korean, the provincial government said in a statement.

“Today we got as close as 12 km to the oil rig, and Chinese forces reacted with many ships and followed us closely. At one point, five Chinese ships surrounded one of ours to stop us from getting close to the oil rig that is operating illegally in our territories,” Colonel Phan Duy Cuong of the Vietnamese Coast Guard said.

Vietnam reacted angrily after China towed a deep-sea oil rig on May 1 close to the Paracel Islands, which are controlled by China but claimed by Hanoi. It sent a flotilla of vessels to try to disrupt the oil rig. Some of the Vietnamese boats clashed with Chinese ships sent to protect the rig, raising fears of a possible conflict.

China has shown no signs of backing down, and accused Vietnam on Wednesday of “hyping” the issue.

“I cannot confirm to you exactly what kind of construction China is conducting on the Chigua Reef (Johnson South Reef in the Spratly Islands). But I can tell you that in principle the Chigua Reef is Chinese territory and so it is totally normal for us to carry out construction there as it is part of our sovereign territory,” said Hua Chunying, China’s foreign ministry spokesperson.

The standoff underlines China’s aggressive pursuit of its territorial claims despite complaints from smaller nations such as Vietnam and the Philippines, which also claim parts of the waters. The United States, a treaty ally of the Philippines, has called the latest Chinese action “provocative”.

China’s Foreign Ministry and its embassy in Hanoi issued warnings to Chinese citizens and urged Vietnam’s government to protect them. The embassy’s website said it saw no end to attacks by what it called anti-China forces and urged Chinese to take safety precautions and avoid unnecessary travel.

Police said 440 people had been detained since Tuesday over the violence. 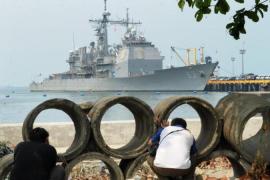 South China Sea disputes: The gloves are off

Southeast China Sea disputes have entered a dangerous stage, as China steps up its territorial claims.